John John loves his sister, but sometimes he needs to exclude her just to have something for himself.  Some space in an idea that he doesn’t have to share everything.

It cracks me up that he gets some satisfaction withholding pretend food from a girl who is not even around or interested when this type of activity is usually happening.

She is around, though, on occasion.  And then, he will have to make up a food that she can’t even pretend to eat.

The other day he was playing ice-cream shop.

“Mama, do you want ice cream?”

“It has caff, caff…” he struggled to find the word for that thing we don’t let him drink.  We drink a lot of coffee and tea, and he knows it’s not for kids.

“Caff…caff… It has alcohol,” he finally came up with.

Yes, that is the other interdit for children in our house.

We were getting food plated for dinner.  John John was super antsy, due to hunger and being almost 3 years old.  He found my phone.  He touched buttons until he found a photo app.  He took pictures.  I let him because, even if an iPhone was ruined, at least dinner would be served.  Little did I know that he would capture everything so beautifully.  I’ll be happy to remember dinner this way forevermore.

From plating to being seated at the table, I give you John John’s first photo essay: 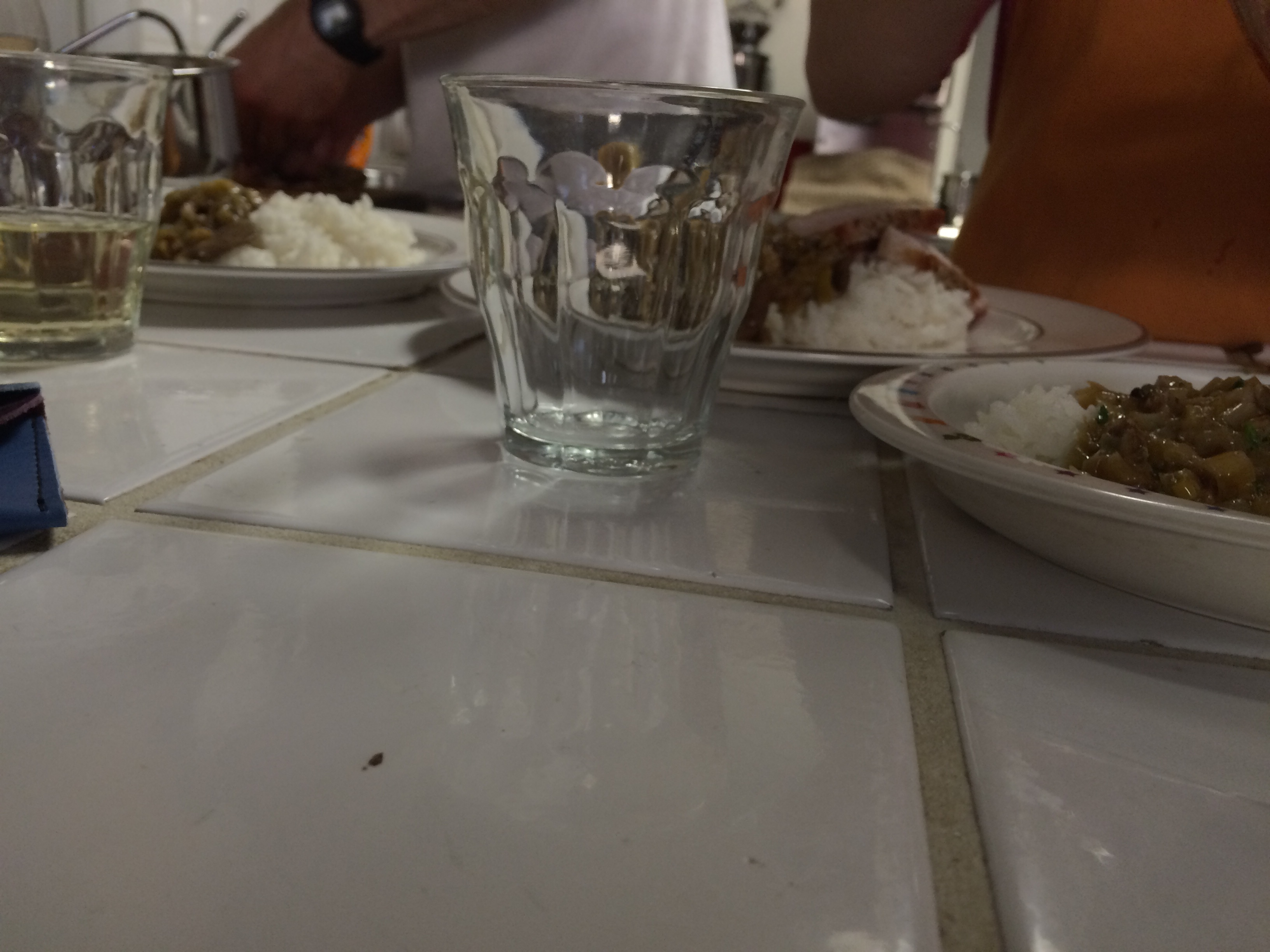 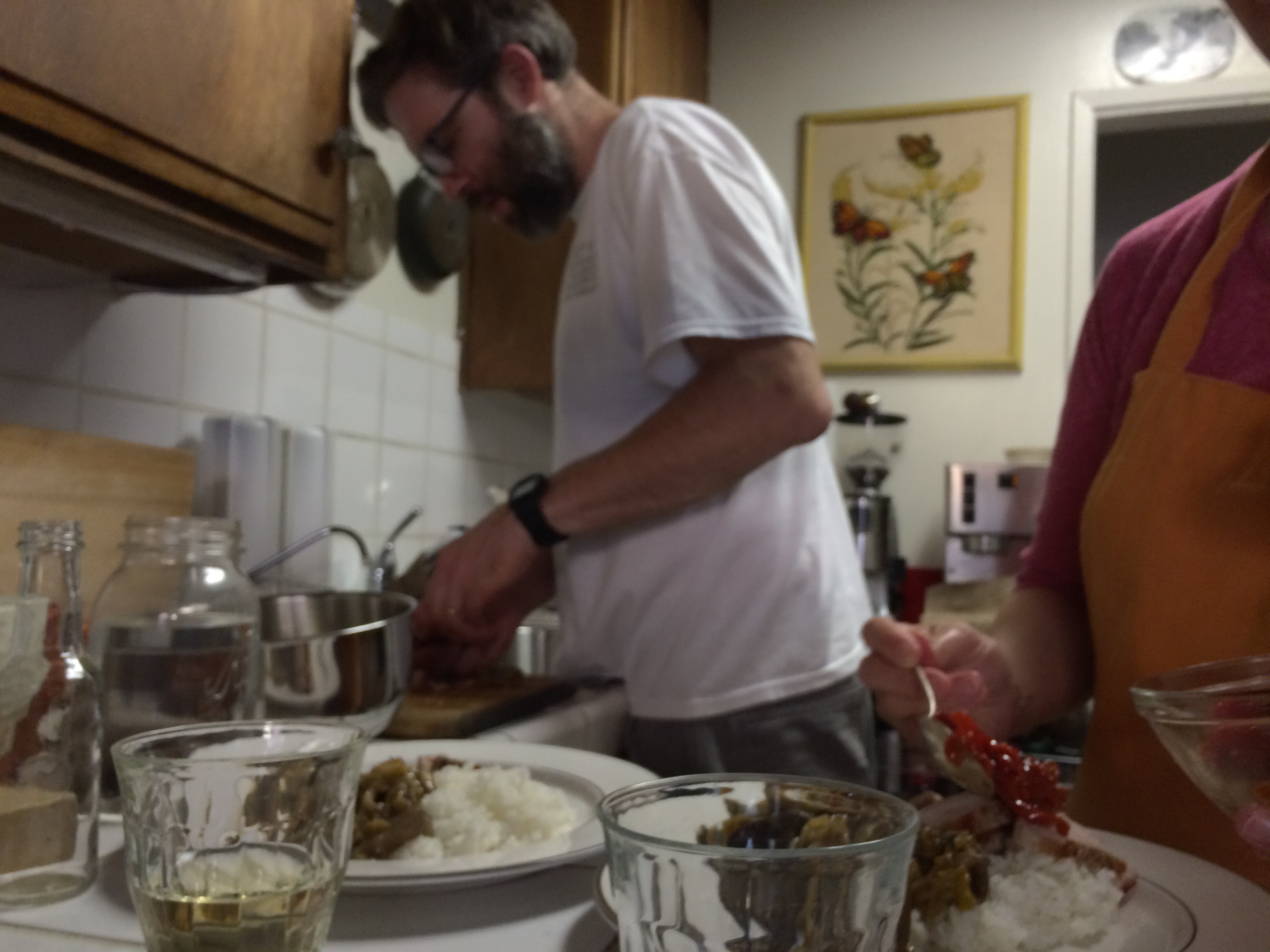 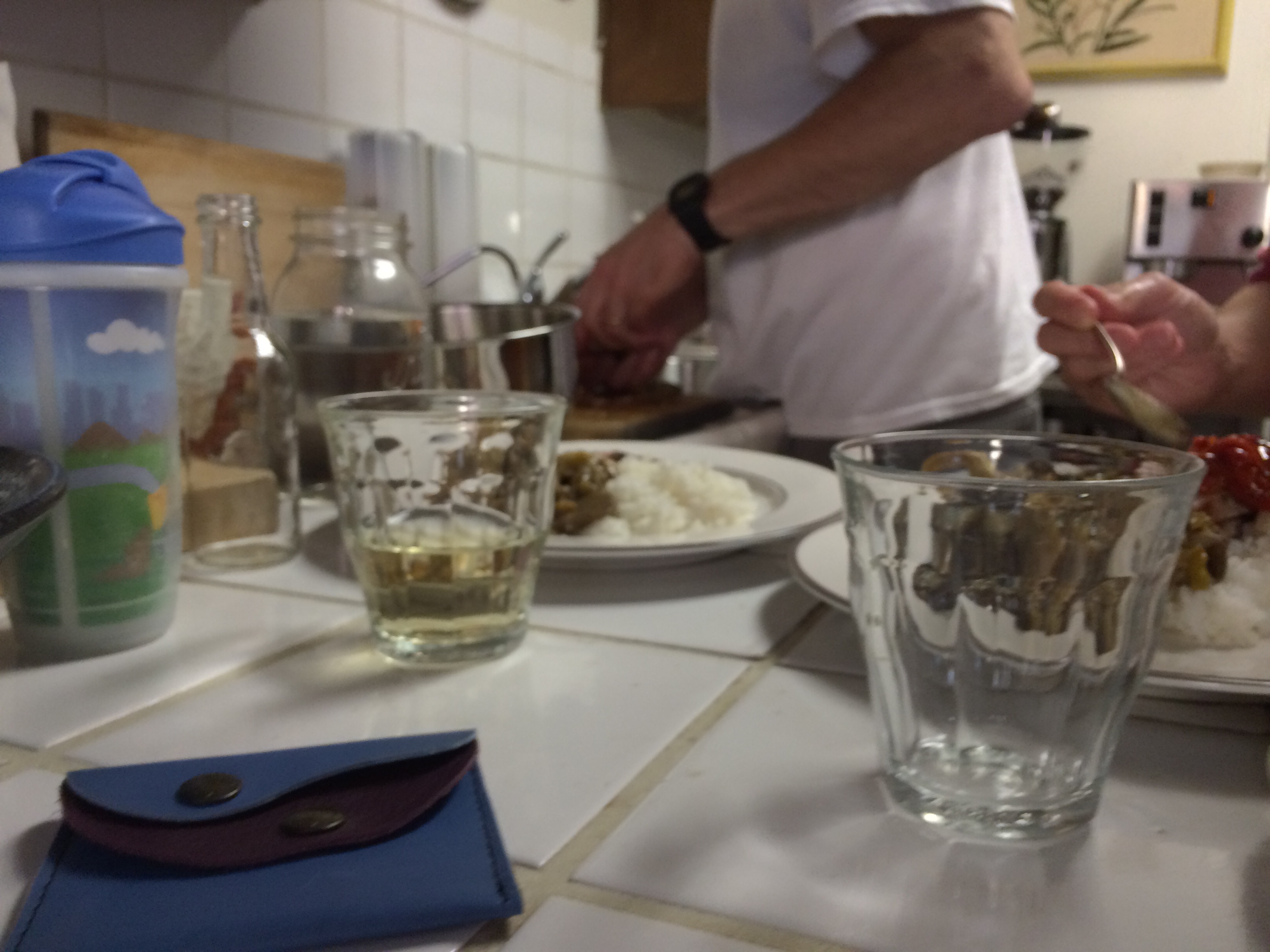 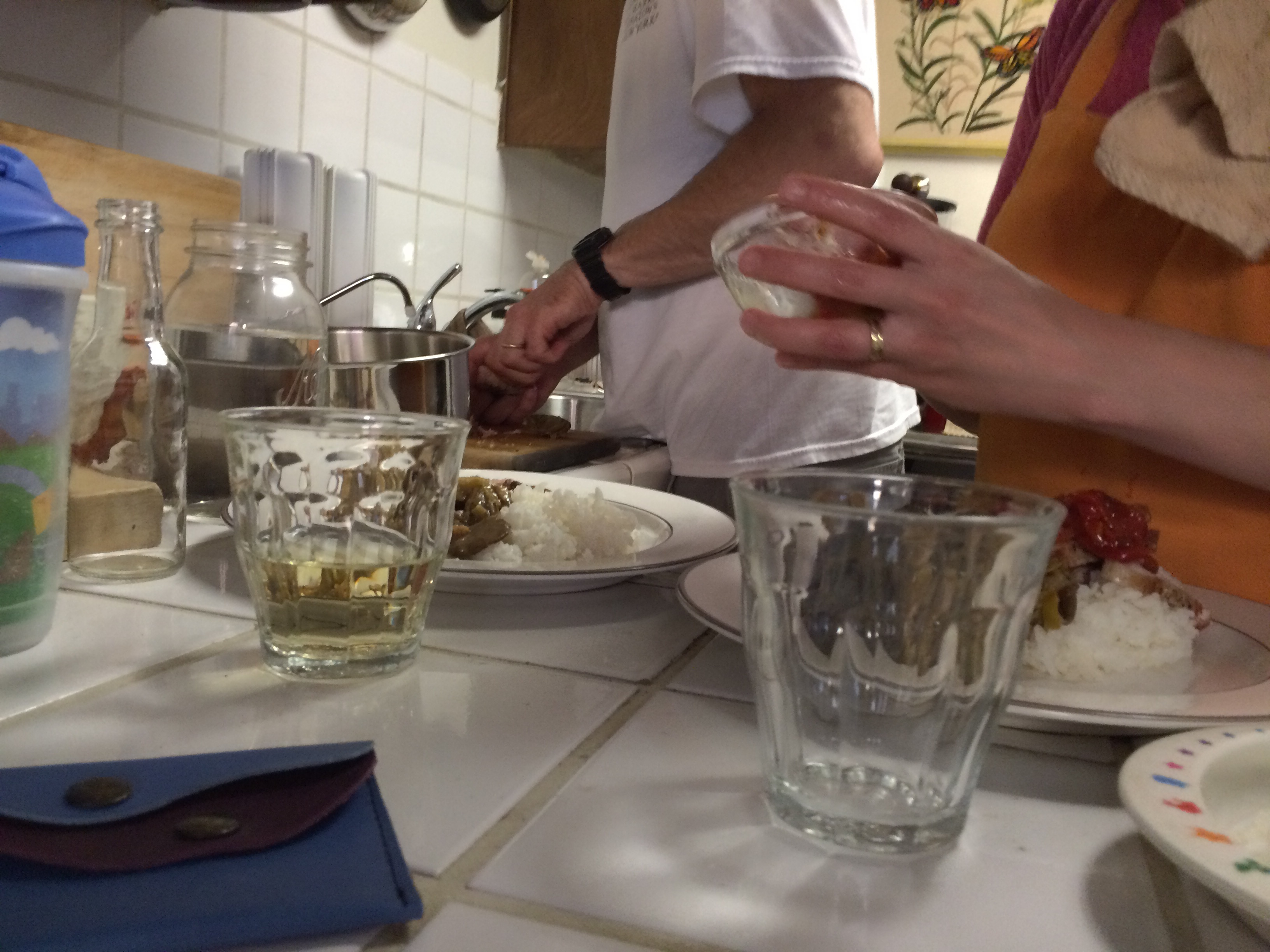 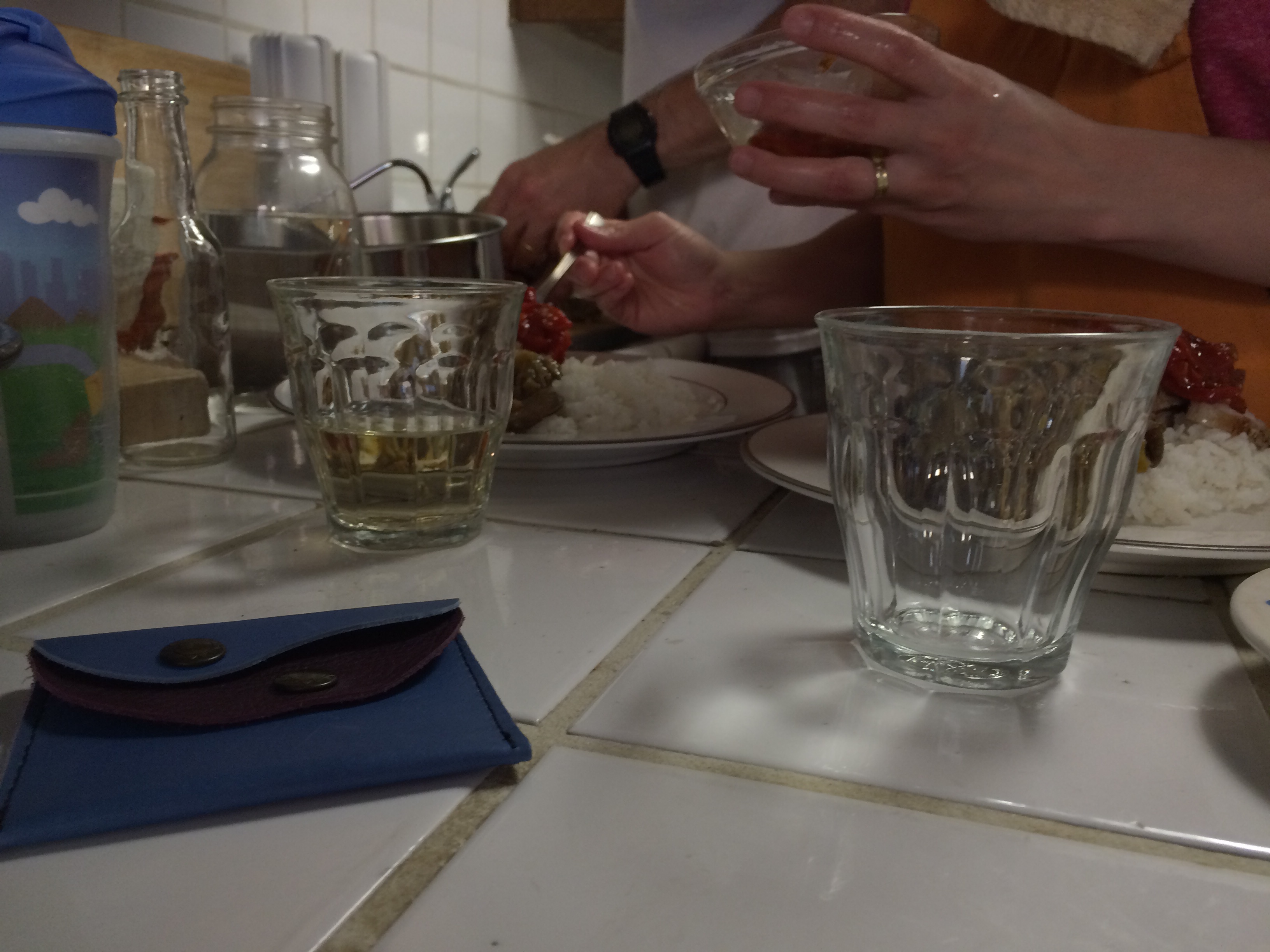 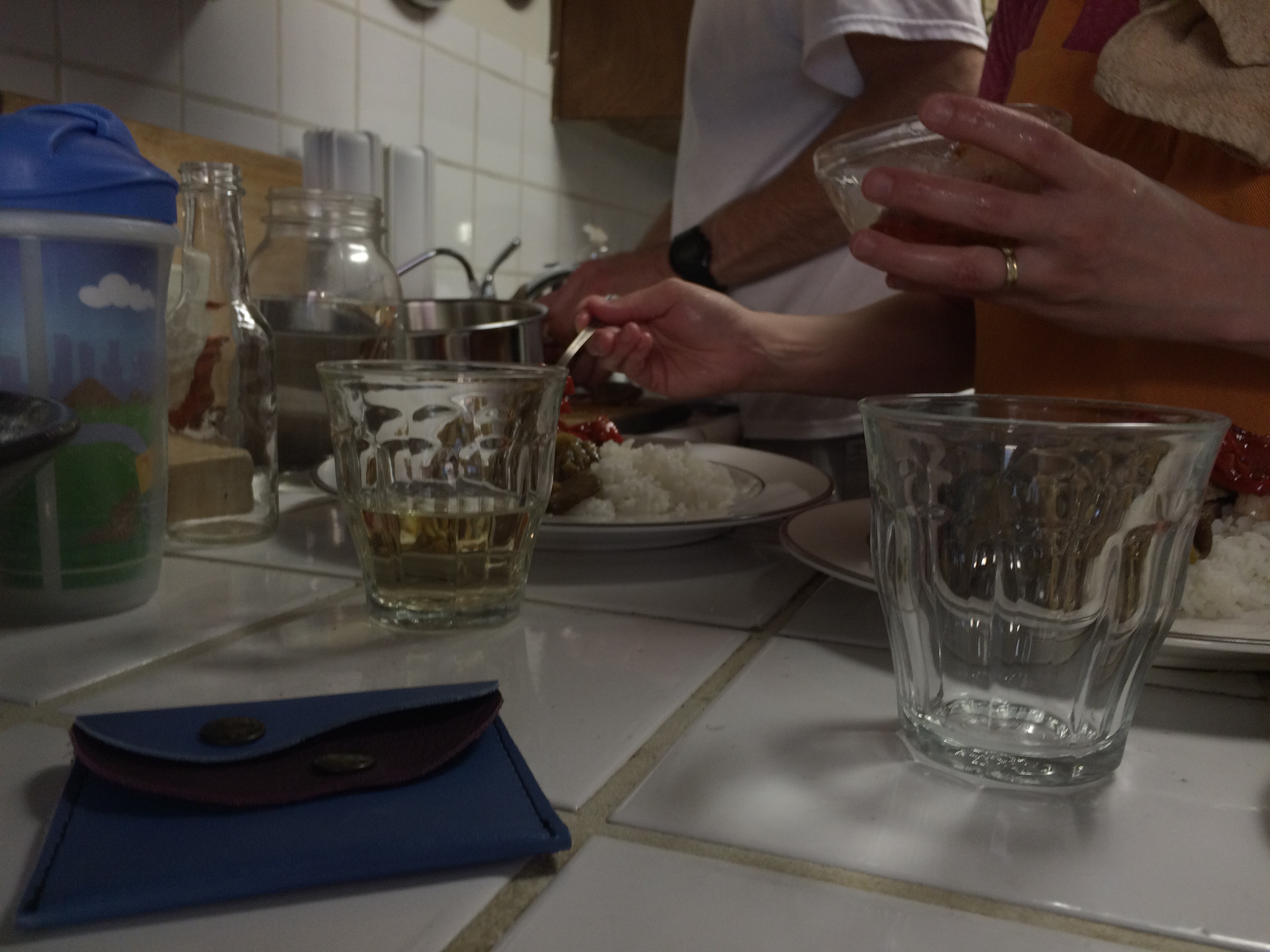 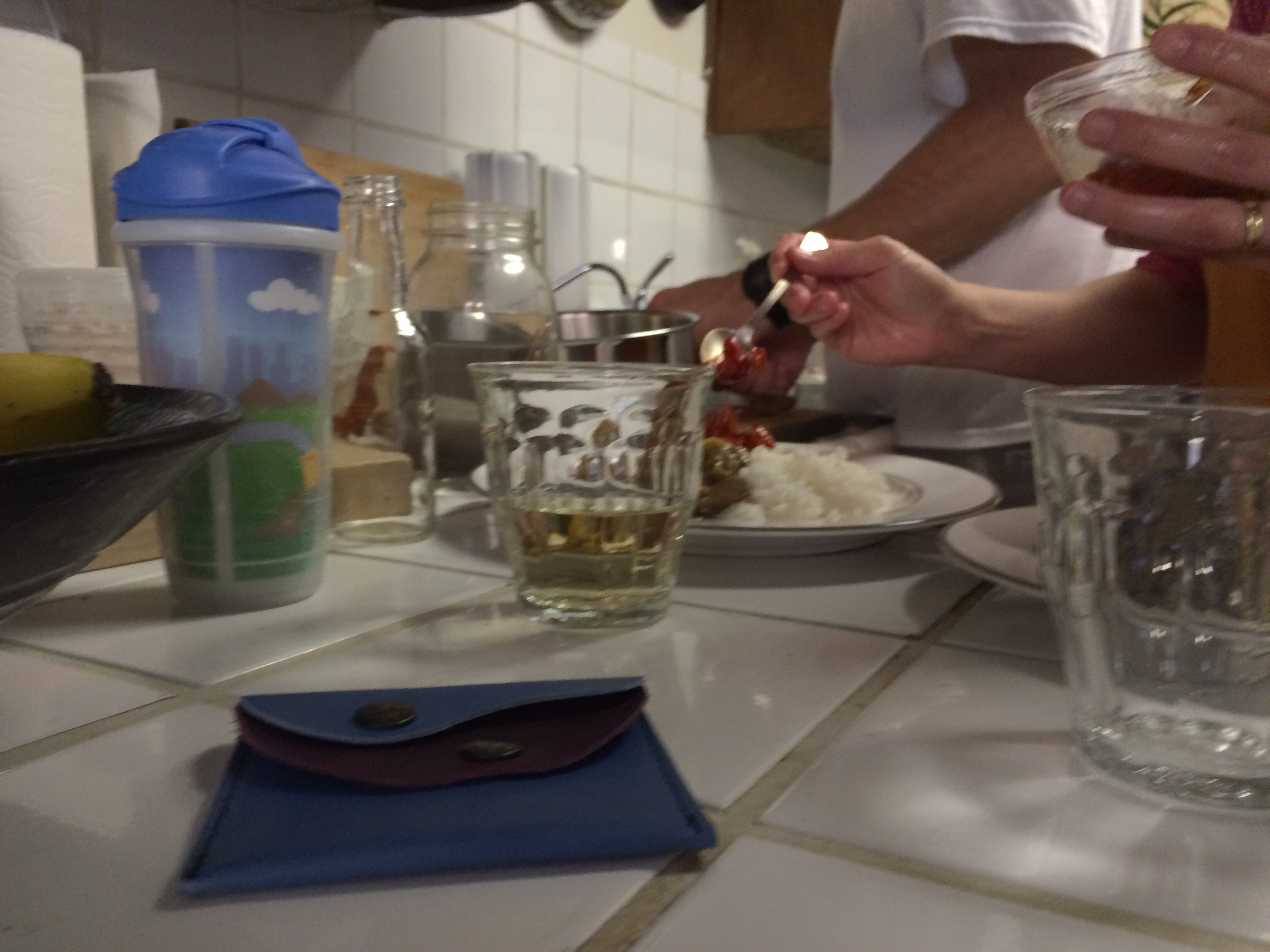 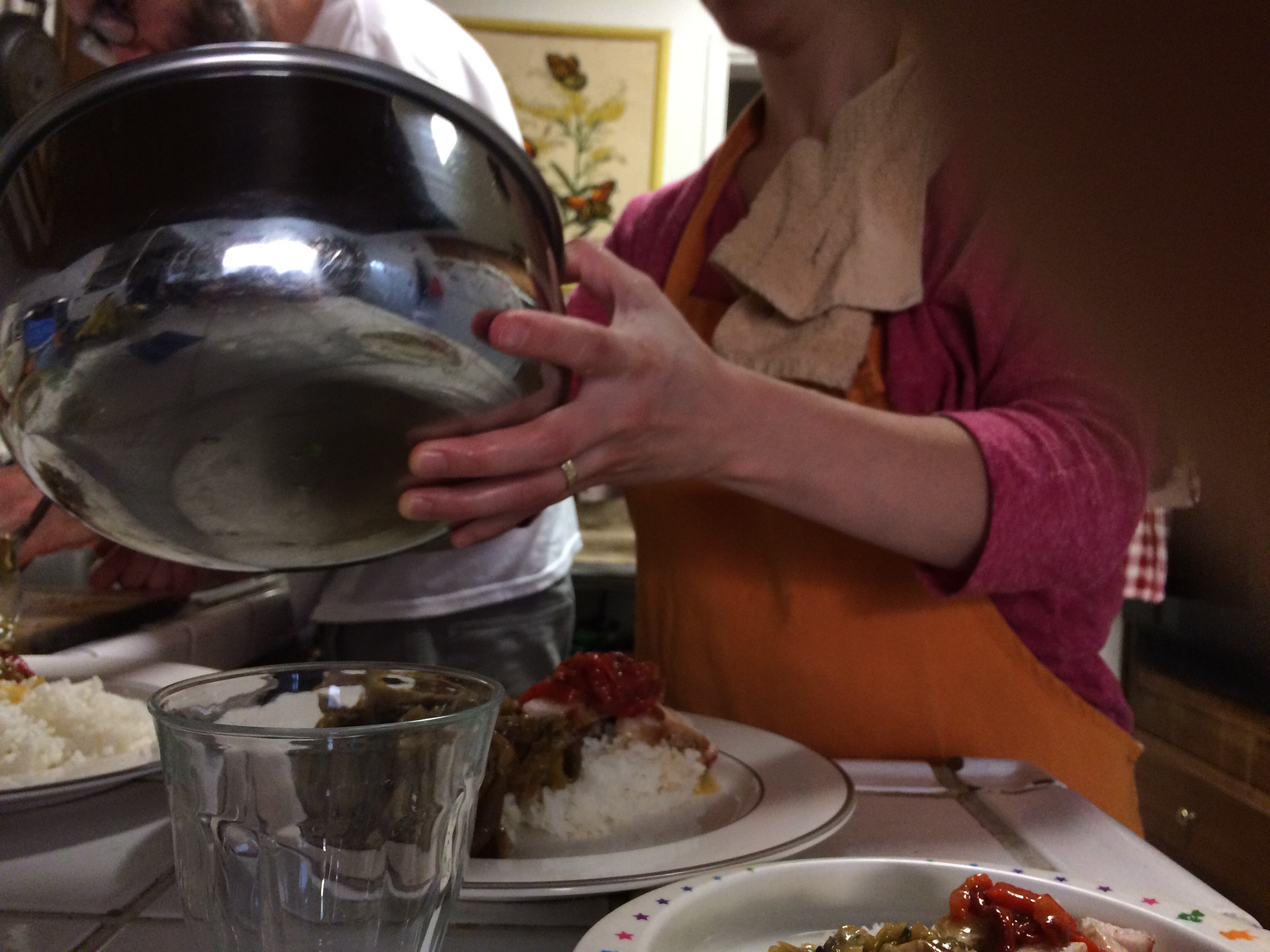 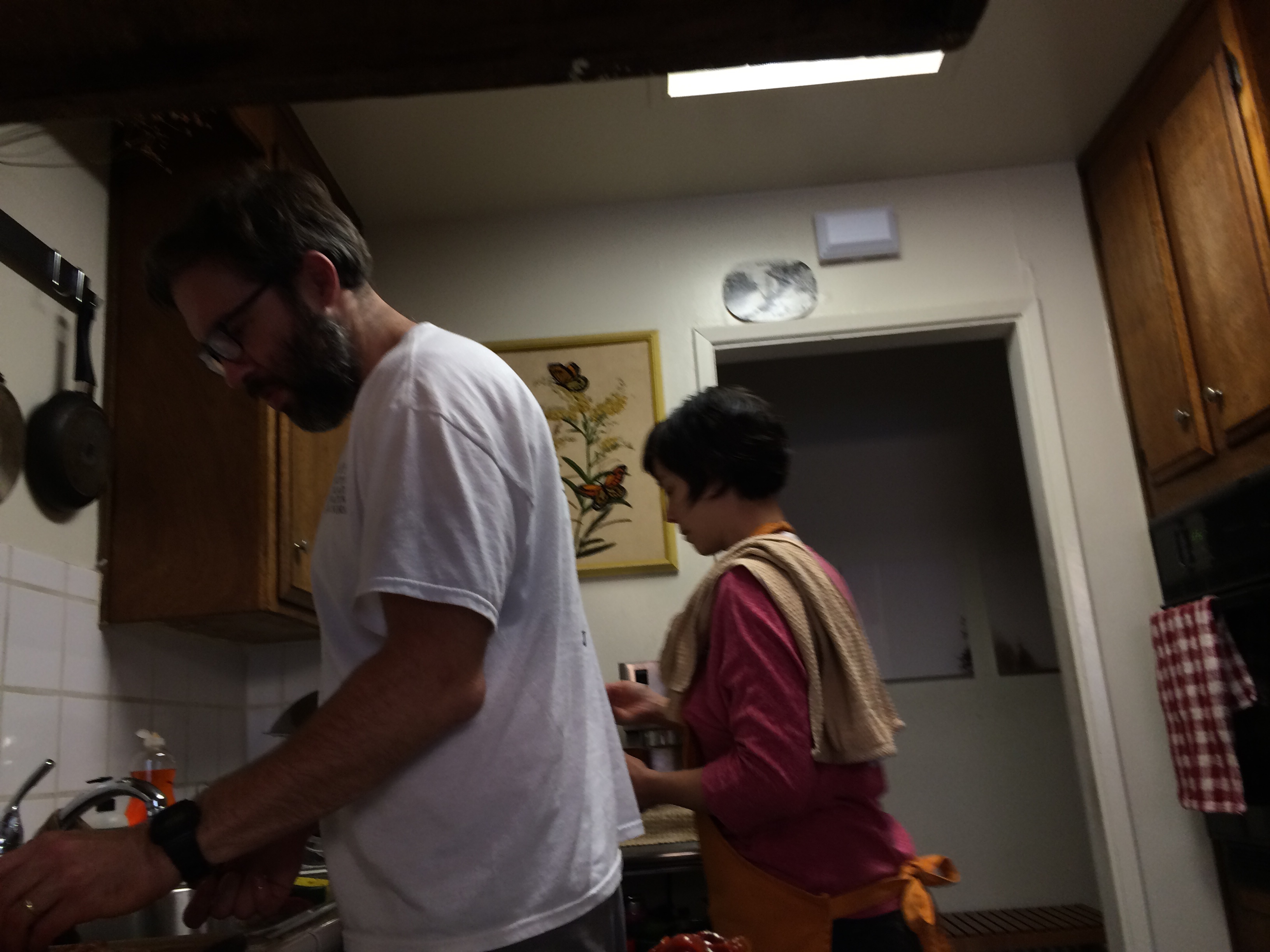 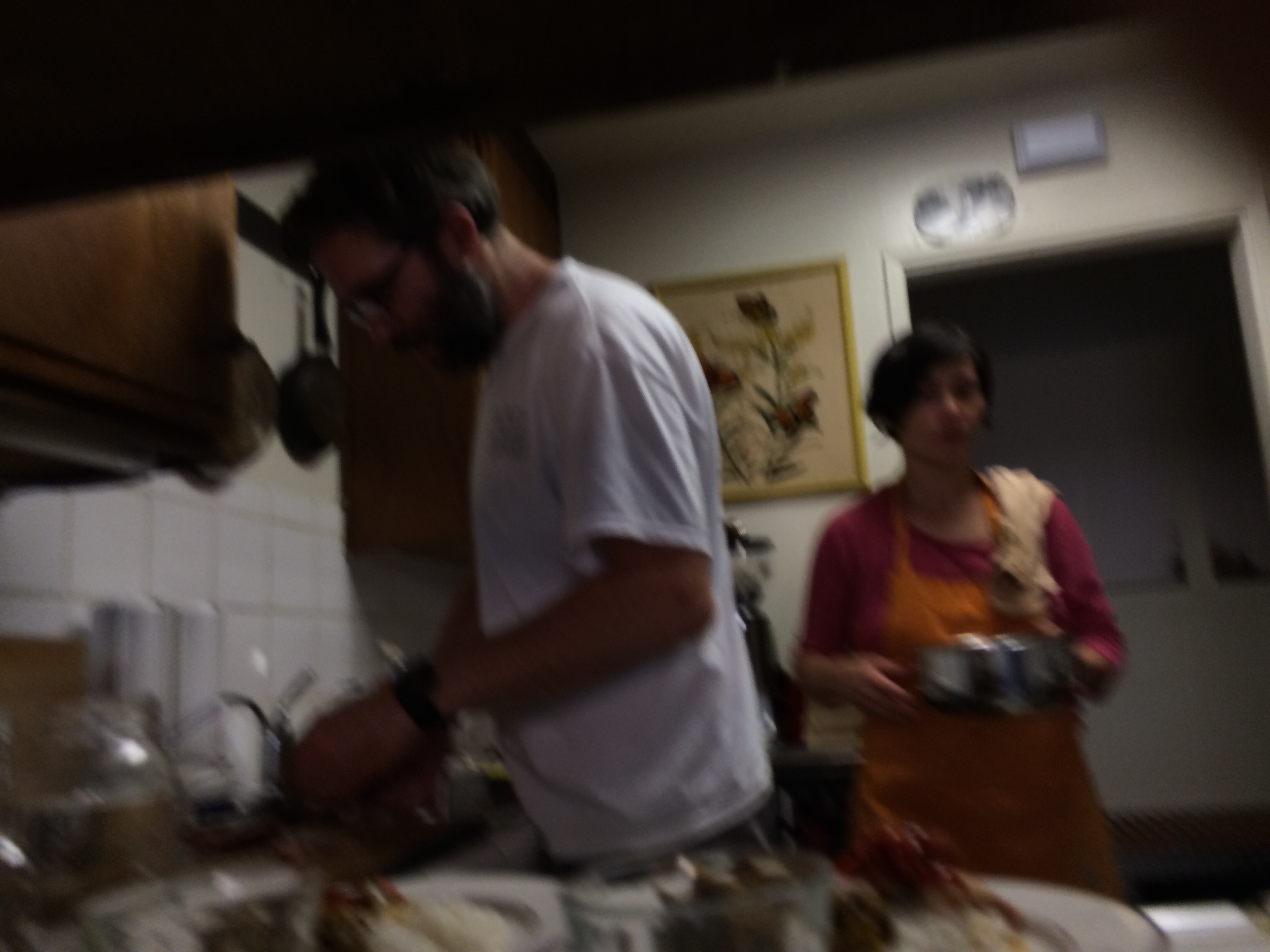 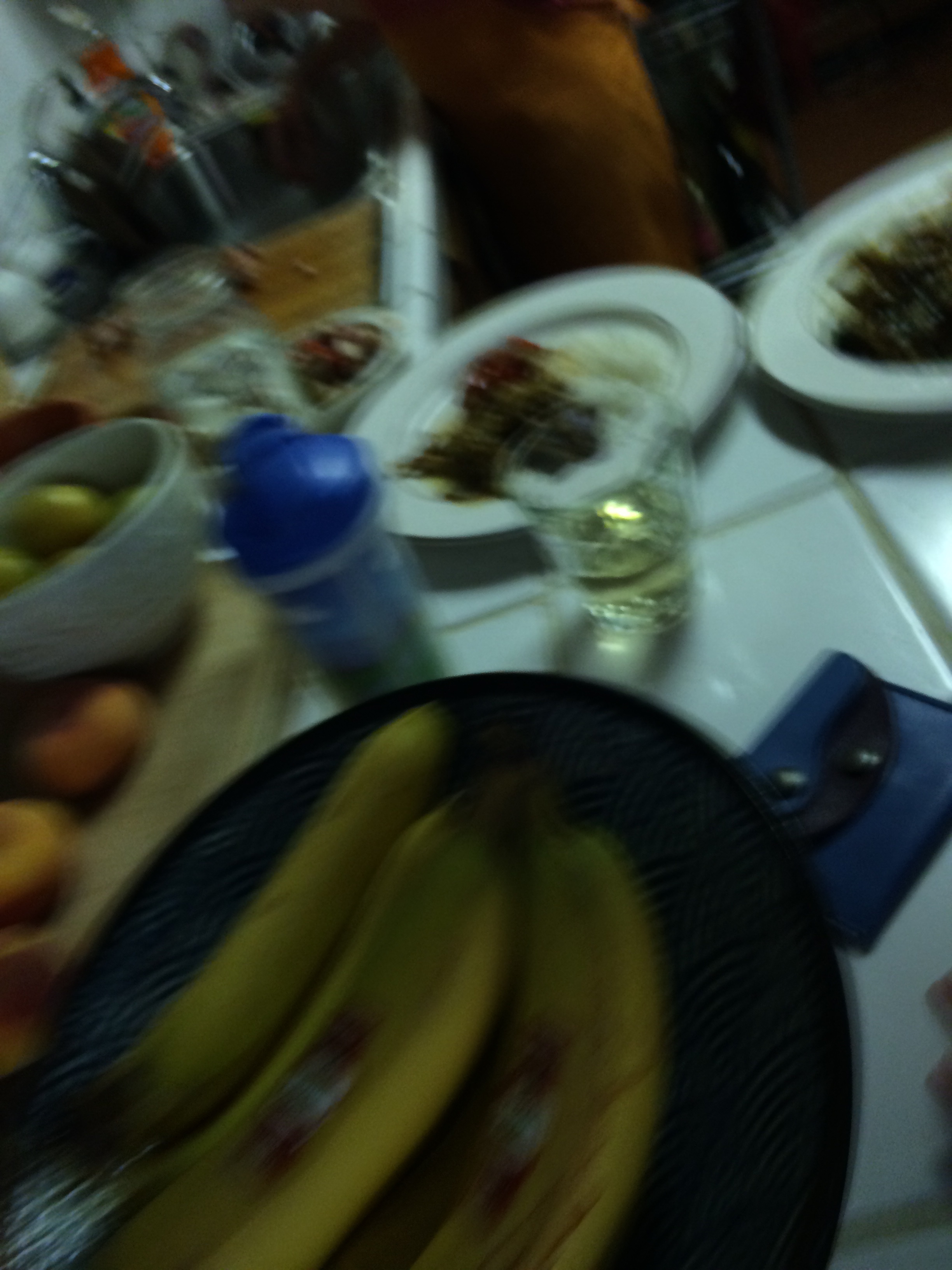 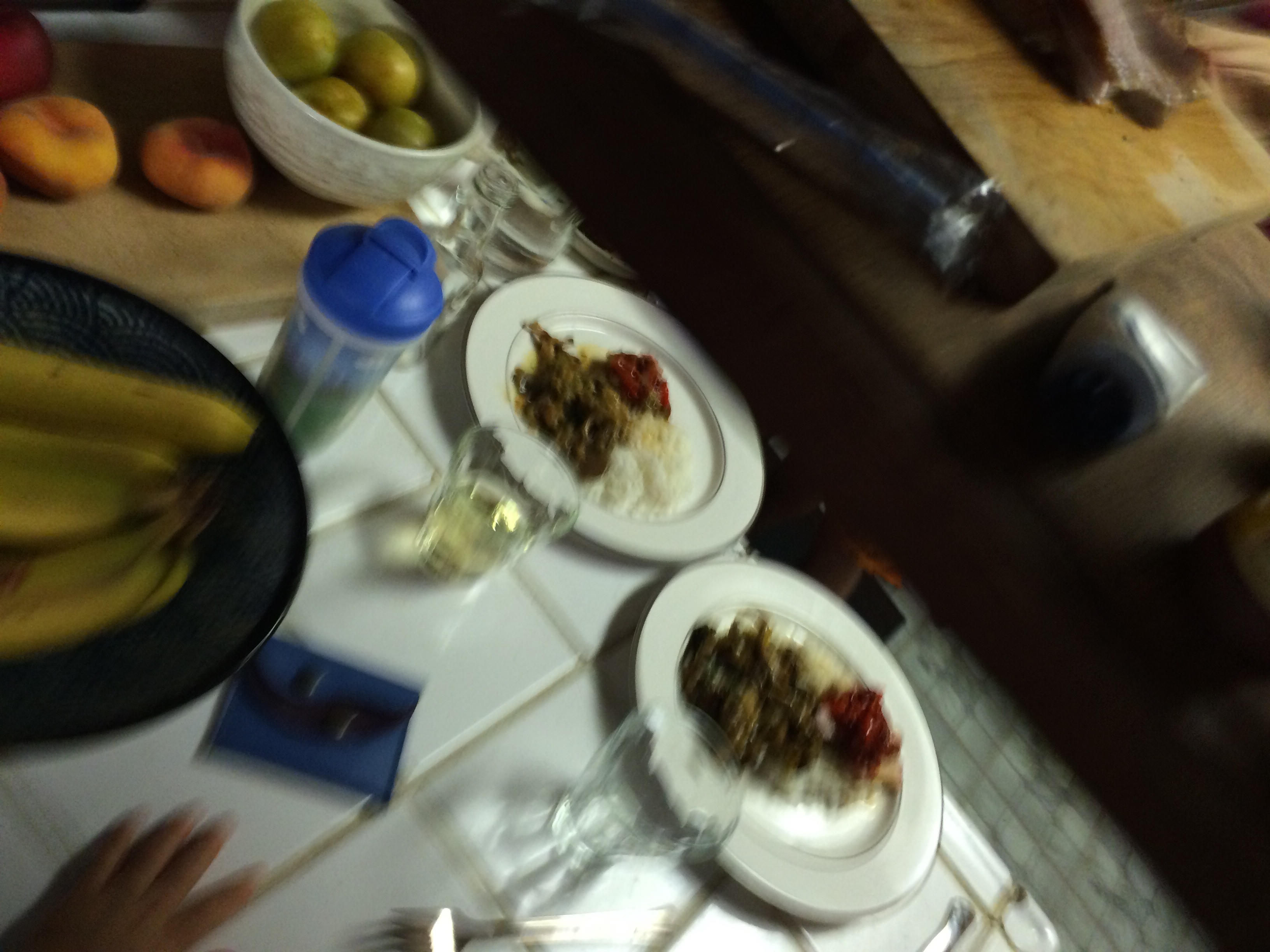 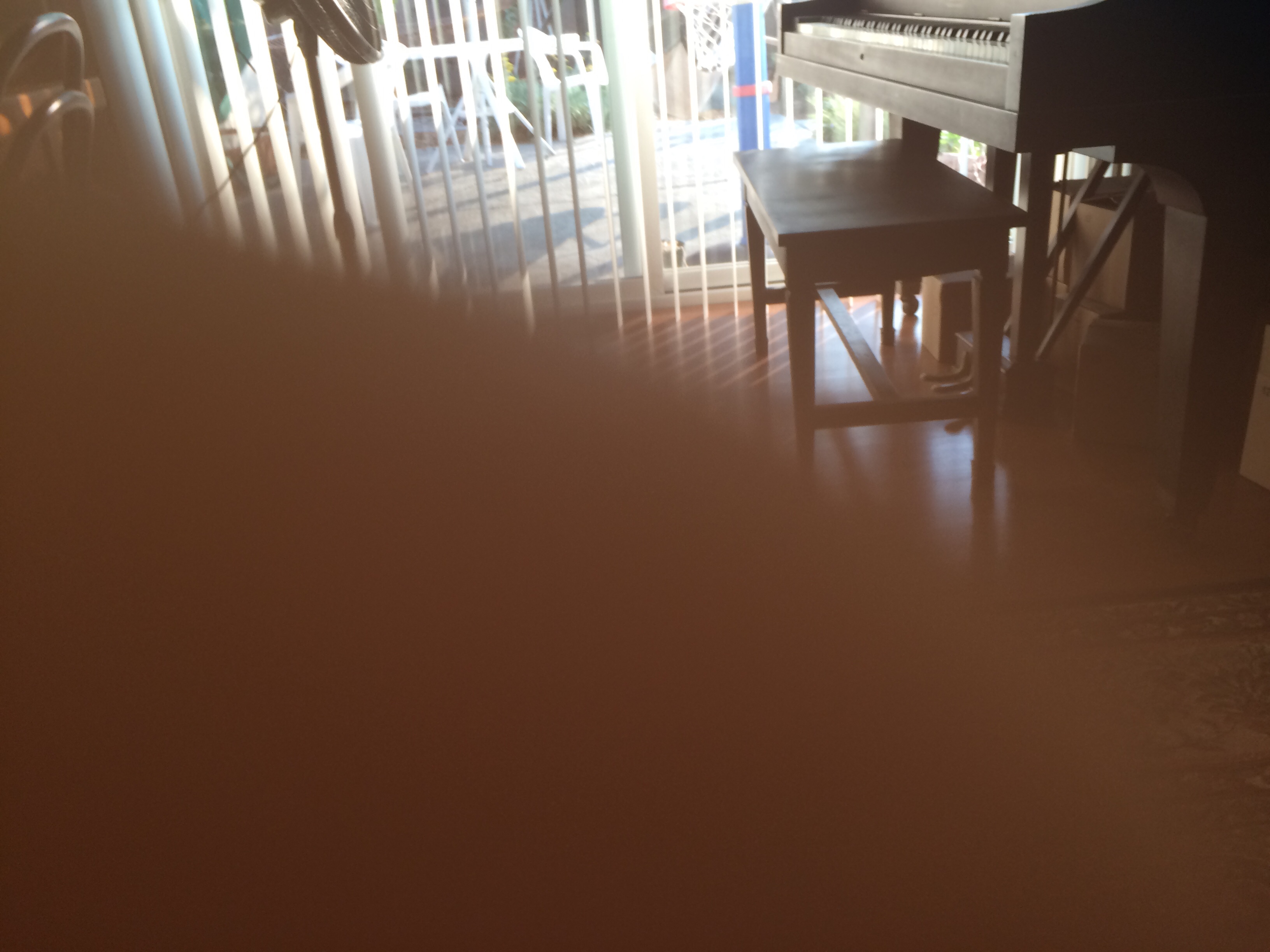 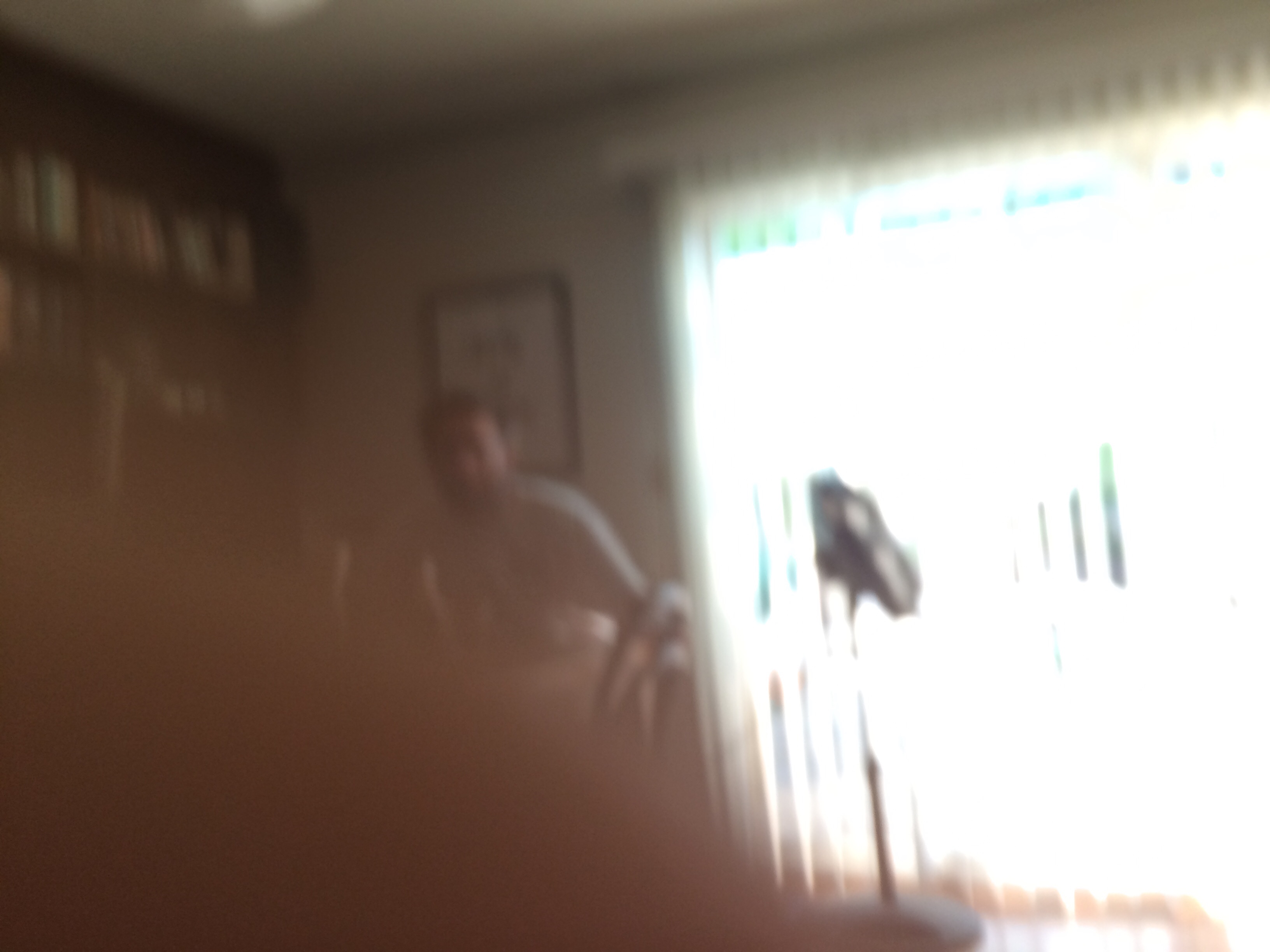 The experience was akin to an International Cafe commercial (Anyone remember those? “Jean-Luc!”).  Sitting at the dinner table with my family – imagine it:

I’m holding a bowl of soup up, inhaling the rich scent, looking through the gently curling steam at my loving husband, chef and creator of this amazing dish.   The buttery-richness of homemade stock mixed with kabocha squash.  Every sip brought the soft focus back to this dinner time pastoral, blurring out the loud and fussing toddler just out of frame to my left, probably throwing food on the ground and shouting no or something like that.  Another sip.  I look out the sliding glass door to see the fading colors of yet another beautiful sunset.  The perfect end to what must have been a perfect day.  “Honey,” I didn’t say because I don’t call anyone that, “this soup is perfection.  Every swallow is like going on vacation.”  I actually did say that second part.  And it was true.  So rich and sumptuous.  So yummy.

That’s when I learned that, in addition to kabocha squash and chicken stock, the soup also had an entire stick of butter in it.

Whatever.  I don’t care.  Calgon, take me away… 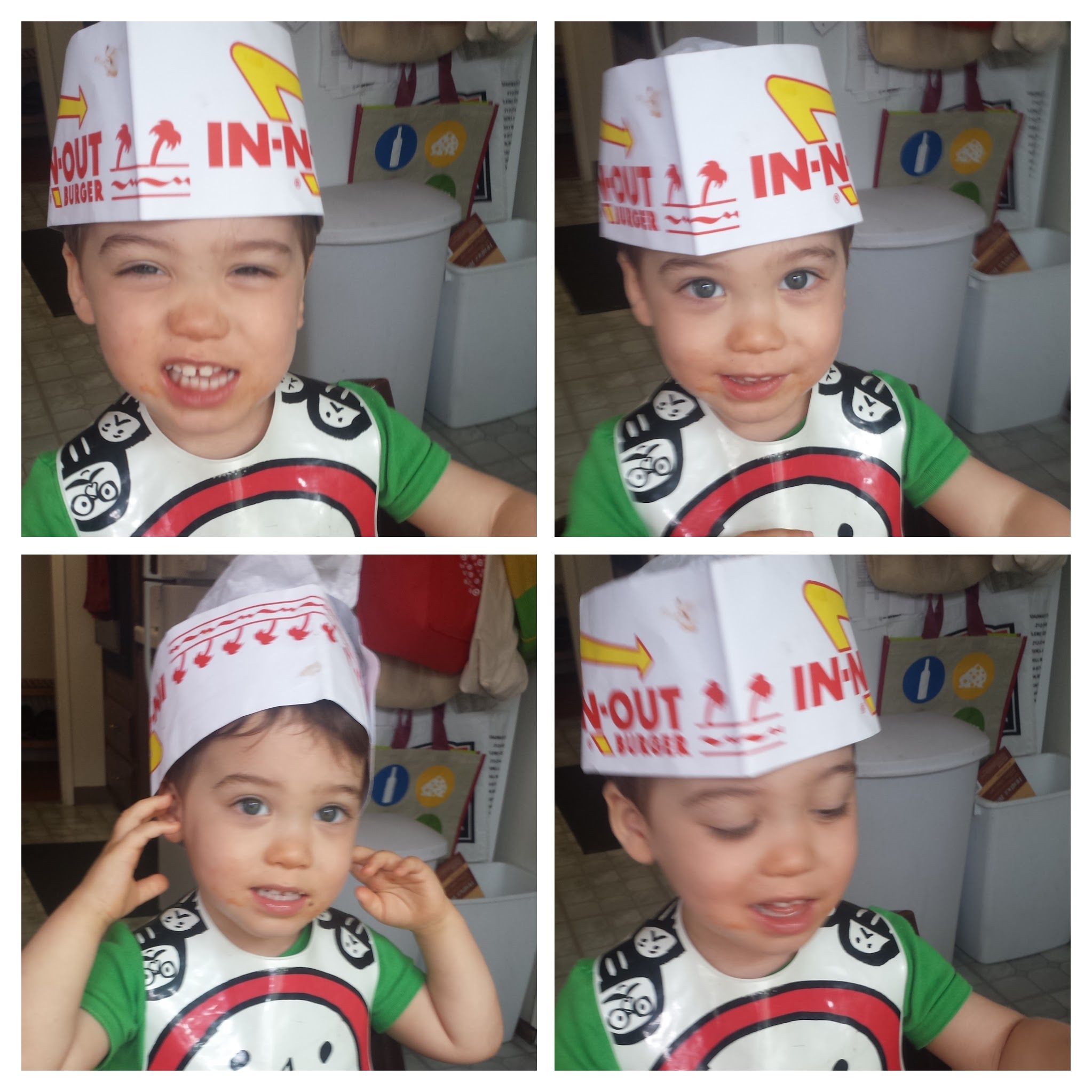 We’re going to Montana later today, so we got burgers for lunch. John John had fun with the hat.

We ate soboro chicken last night – the closest thing to comfort food in my world and Japanese to the core.  Chicken and egg with flavorings of shoyu and dashi and sesame oil, some mirin, garnished with a piece of nori.  The added bonus is that it’s incredibly fast to make, so we were able to sit down to a family meal.   John John has been really excelling at his use of the fork, so this may have been his first experience eating soboro with one bite having many flavors combined: chicken, egg, peas, seaweed.

“I’m so glad John John can grow up in a  world that knows seaweed,” I sighed.

And immediately realized how empty that sounded.  But seriously, growing up in Newhall, CA,  I’ll always remember when ‘sushi’ was a disgusting foreign dish with raw fish – if anyone knew what it was at all – and I was teased for the rice balls with seaweed in my lunch box: “Seaweed? Ewwww!!  Gross!!”  That’s when I felt the need for lunchables, but back to this post.

“Can I have hot sauce?” asked John.  I looked at him askance.  “Is that wrong?” he said.  I gave him some, because who is to say what is right and wrong with all of the mixing of flavors in the world.  If there can be Korean Tacos, John can eat hot sauce on soboro.  “It’s good,” he attested.  I’m too set in my ways when it comes to this comfort food, so passed on using the condiment as much as I do love it.  But John John pointed to the mostly empty dish of hot sauce.  “Mo,” he said, and signed “please.”  I put some on a piece of chicken and he ate it.

He ate the rest of his meal with hot sauce. 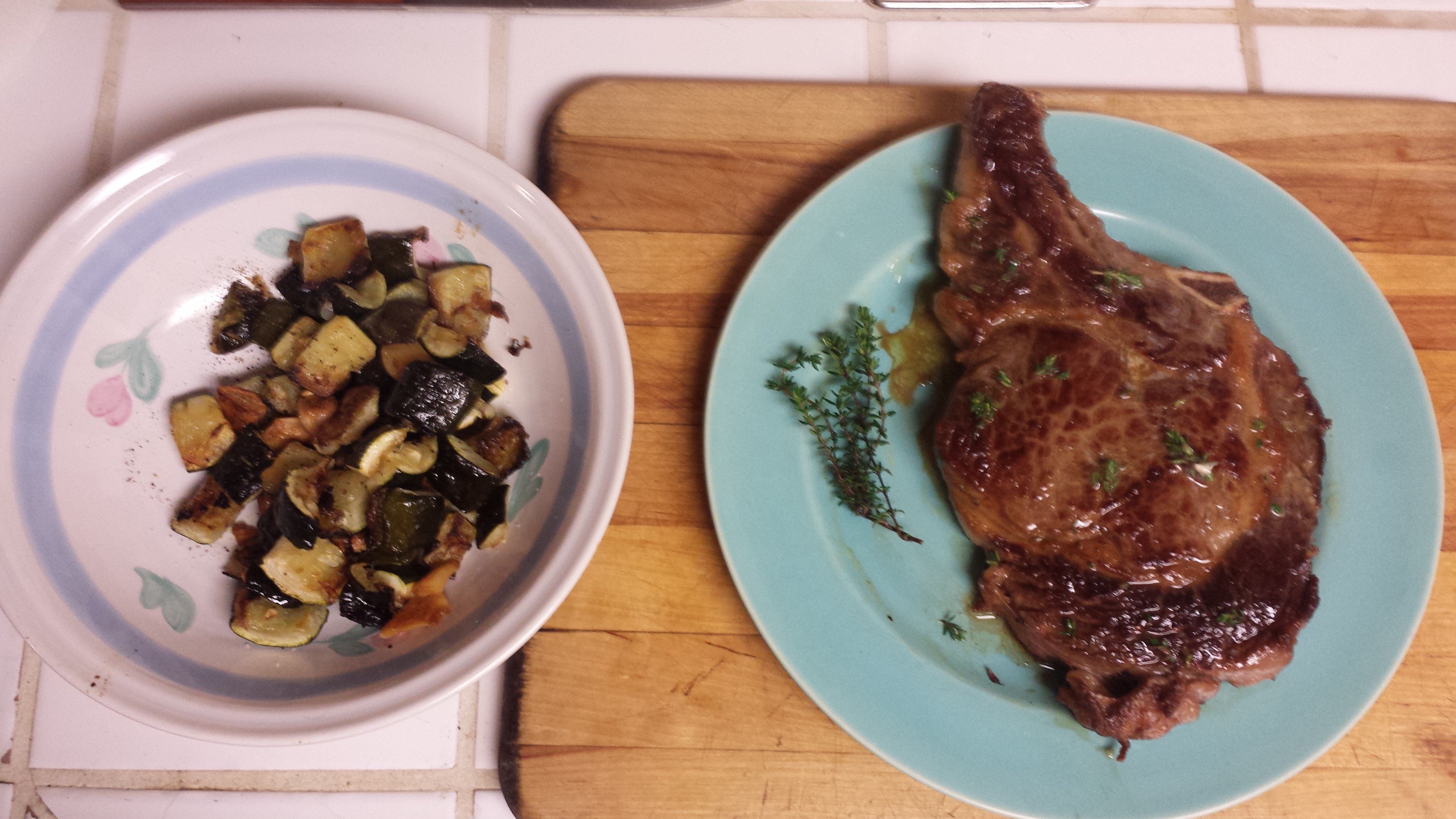 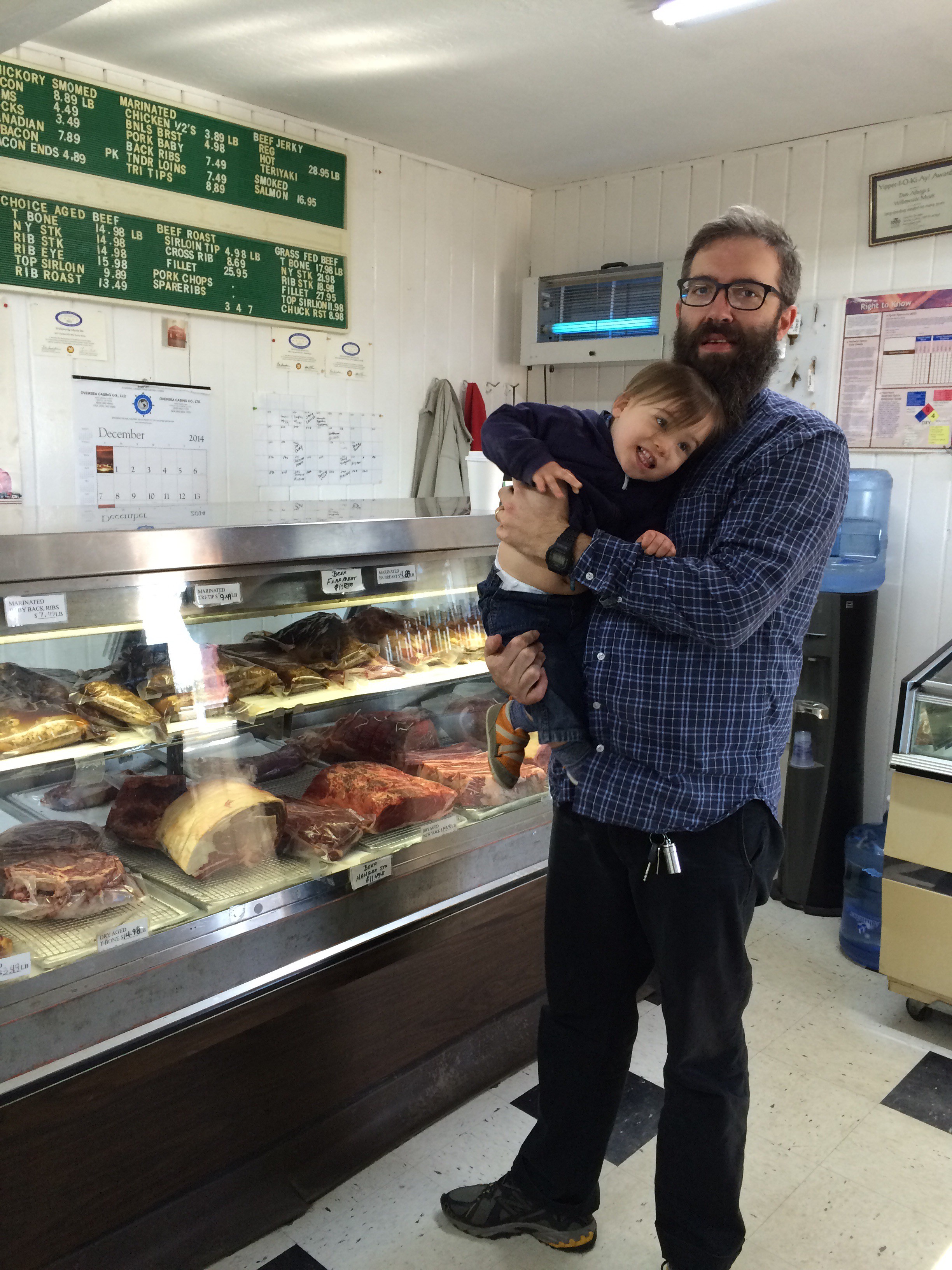 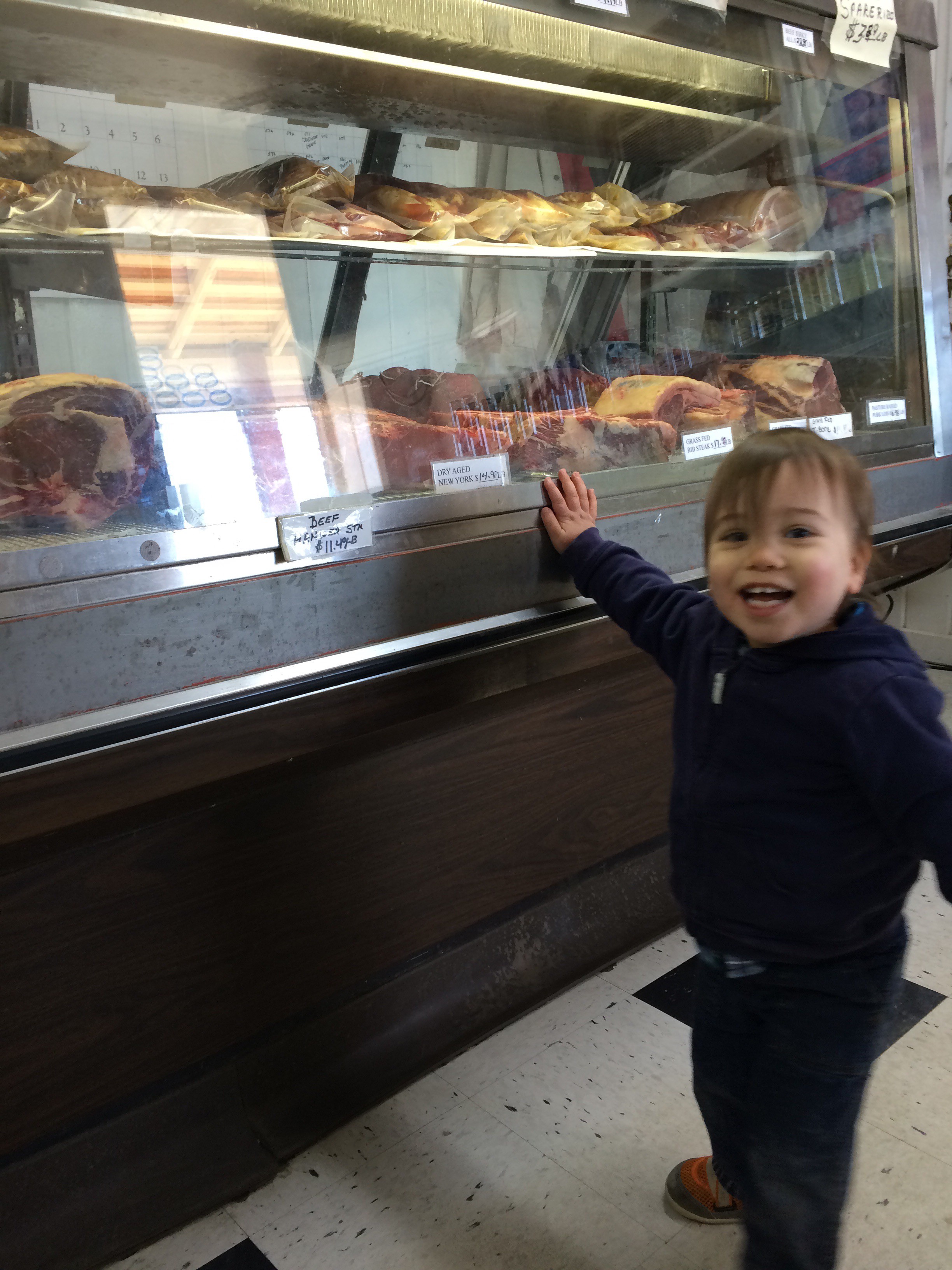 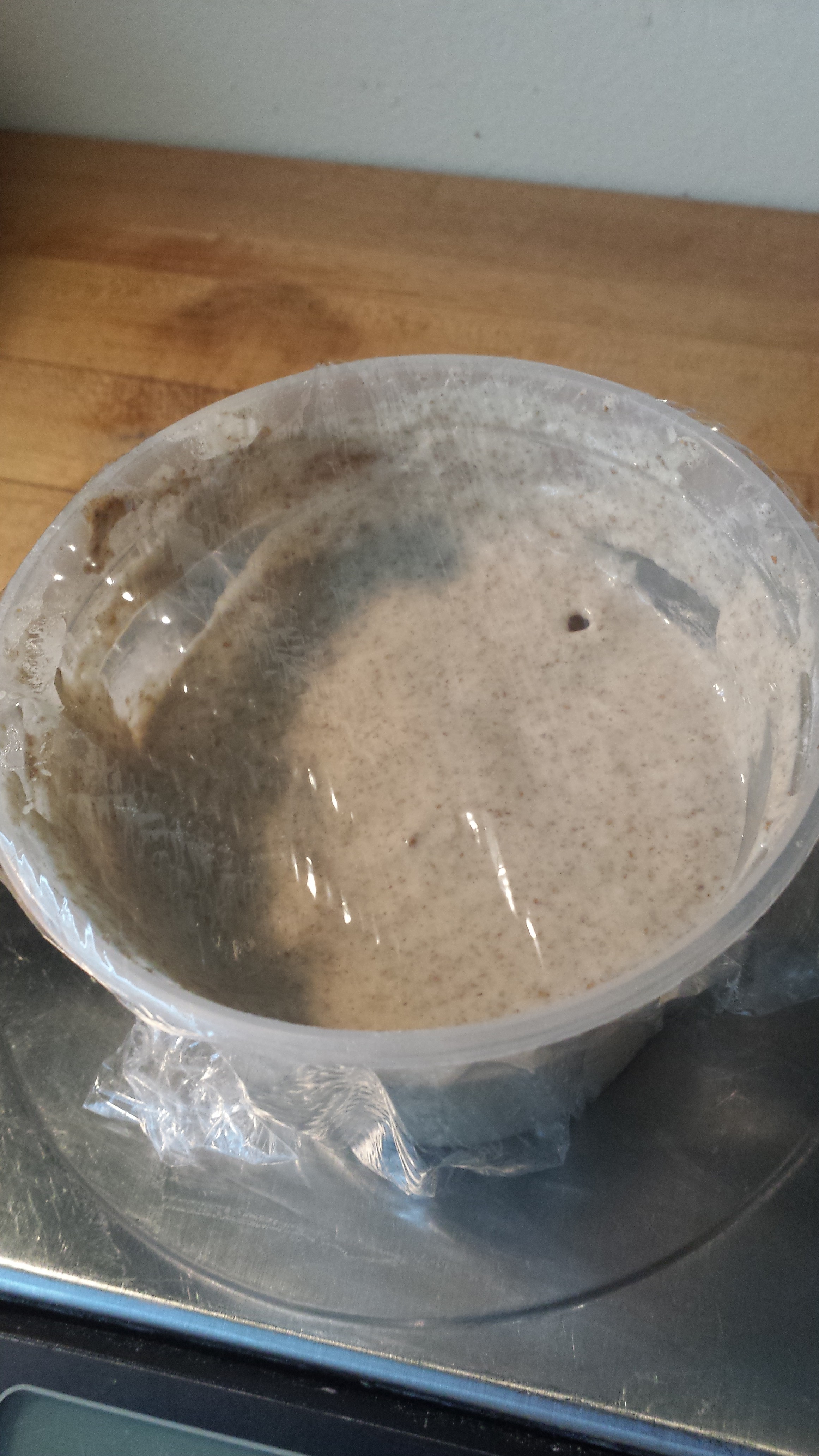 This is day two of the seed culture for a wild yeast starter. I’ll use it for baking bread. I had one for several years in Bushwick. Once it gets started, it will need weekly feedings of flour and water, and it can live indefinitely. This is my first in California.  The bubble at the top right is air produced by yeast activity. It’s alive. 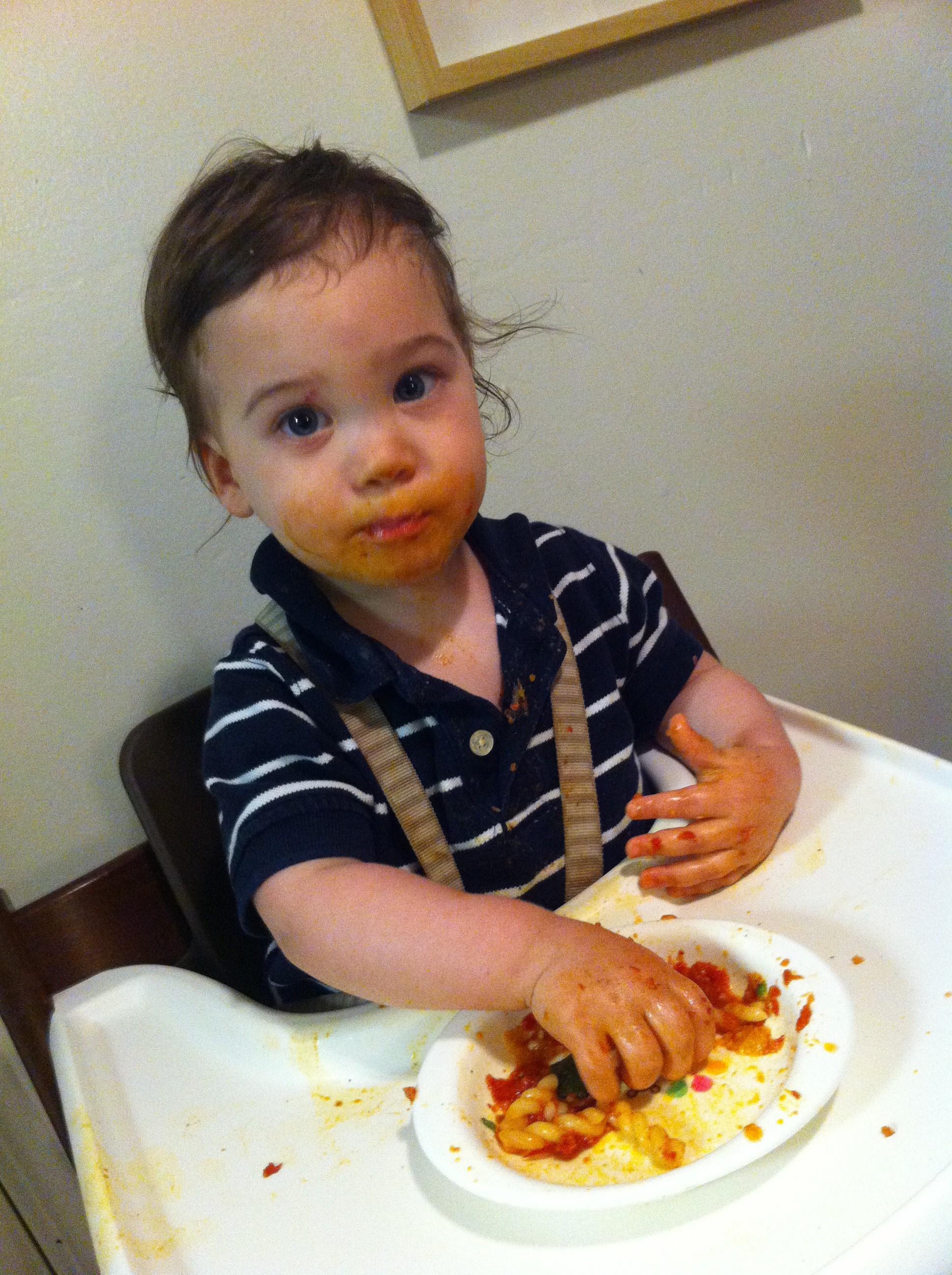 Someone loves Papa’s pasta sauce!!  John John can almost use a fork now, so the days of pasta mayhem may be on the wane.

In the meantime: ENJOY A CUTE MESS! 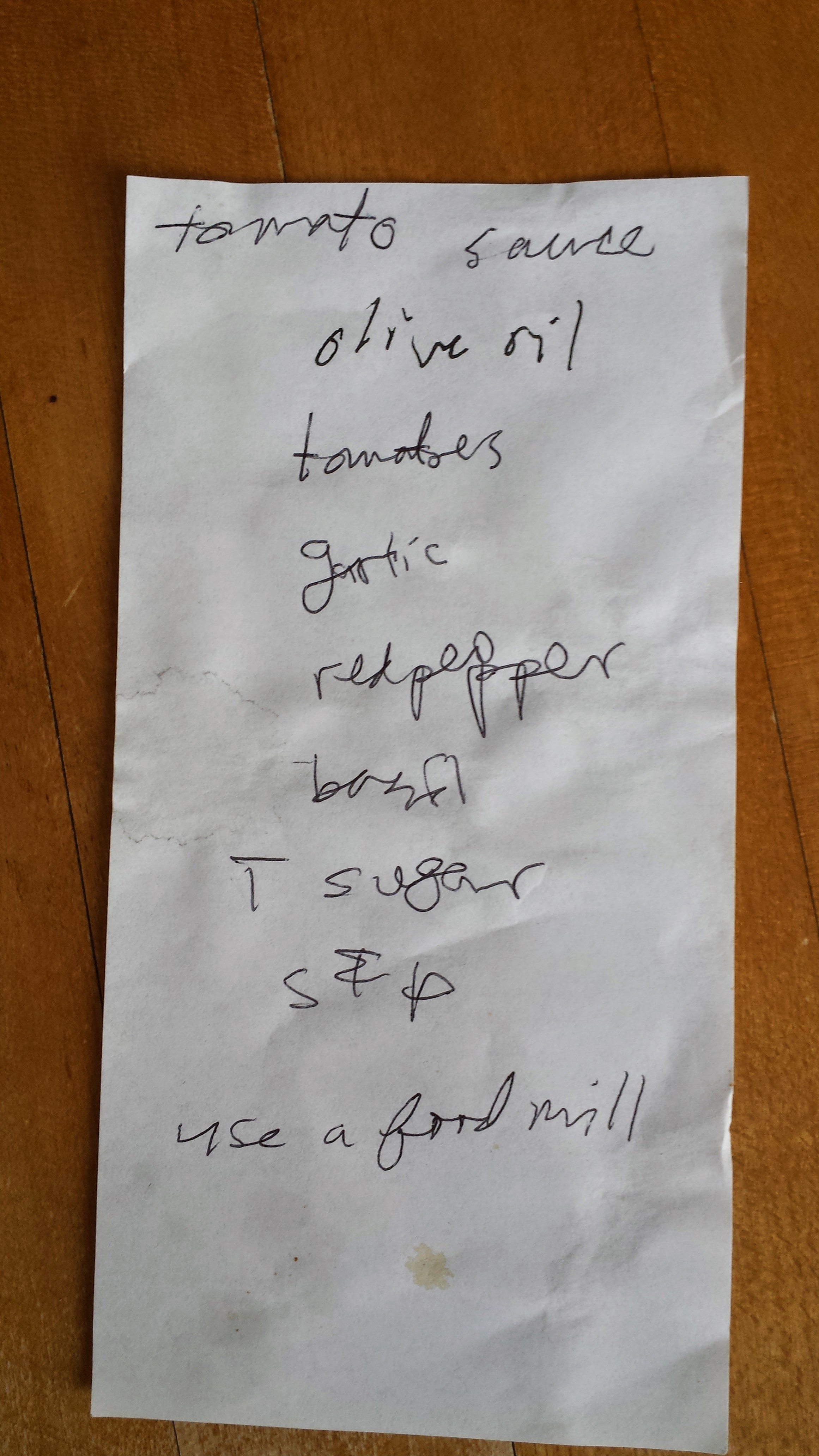 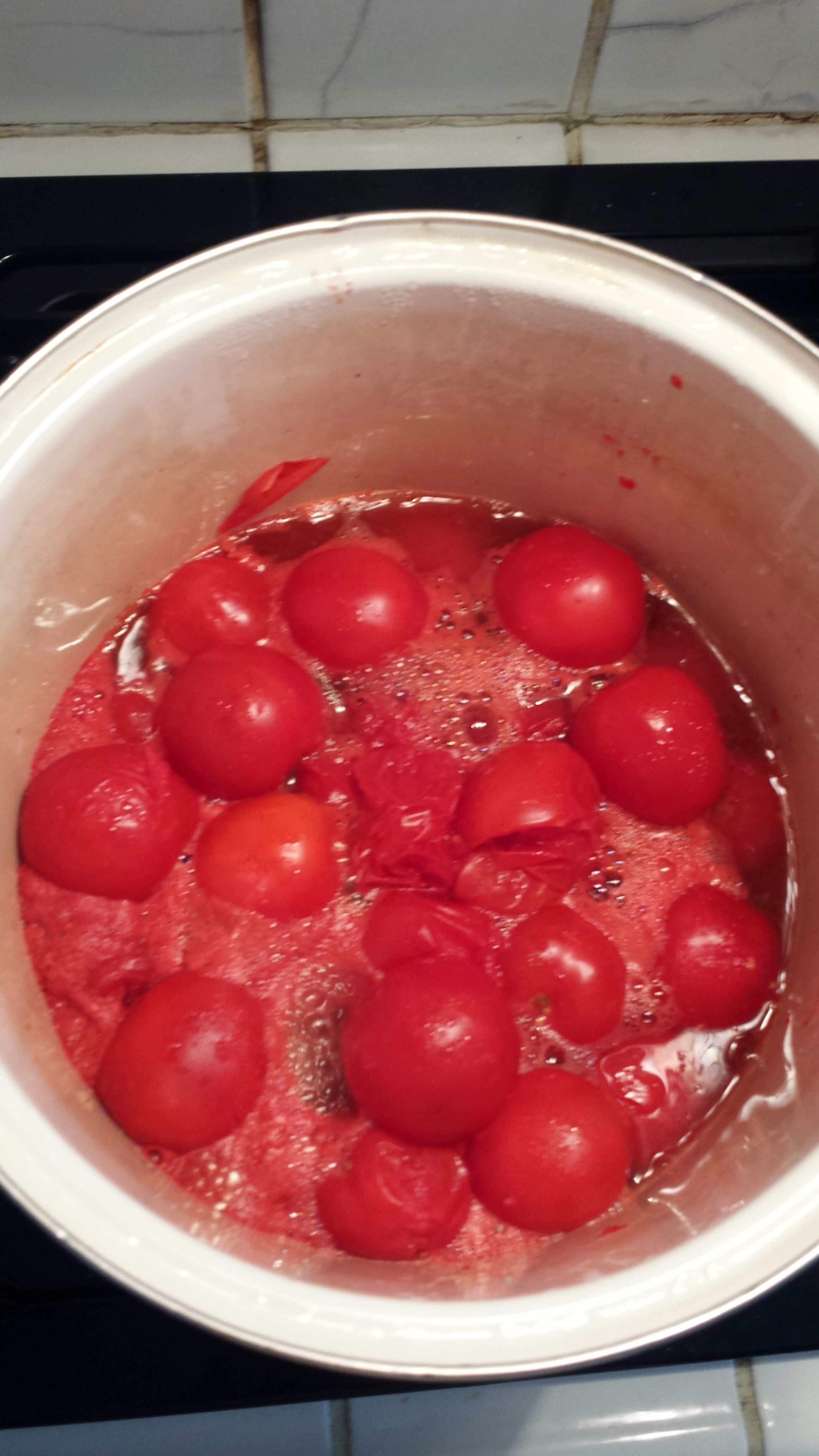 First I cook the tomatoes in their own juices. This was when I took them off, after about thirty minutes. 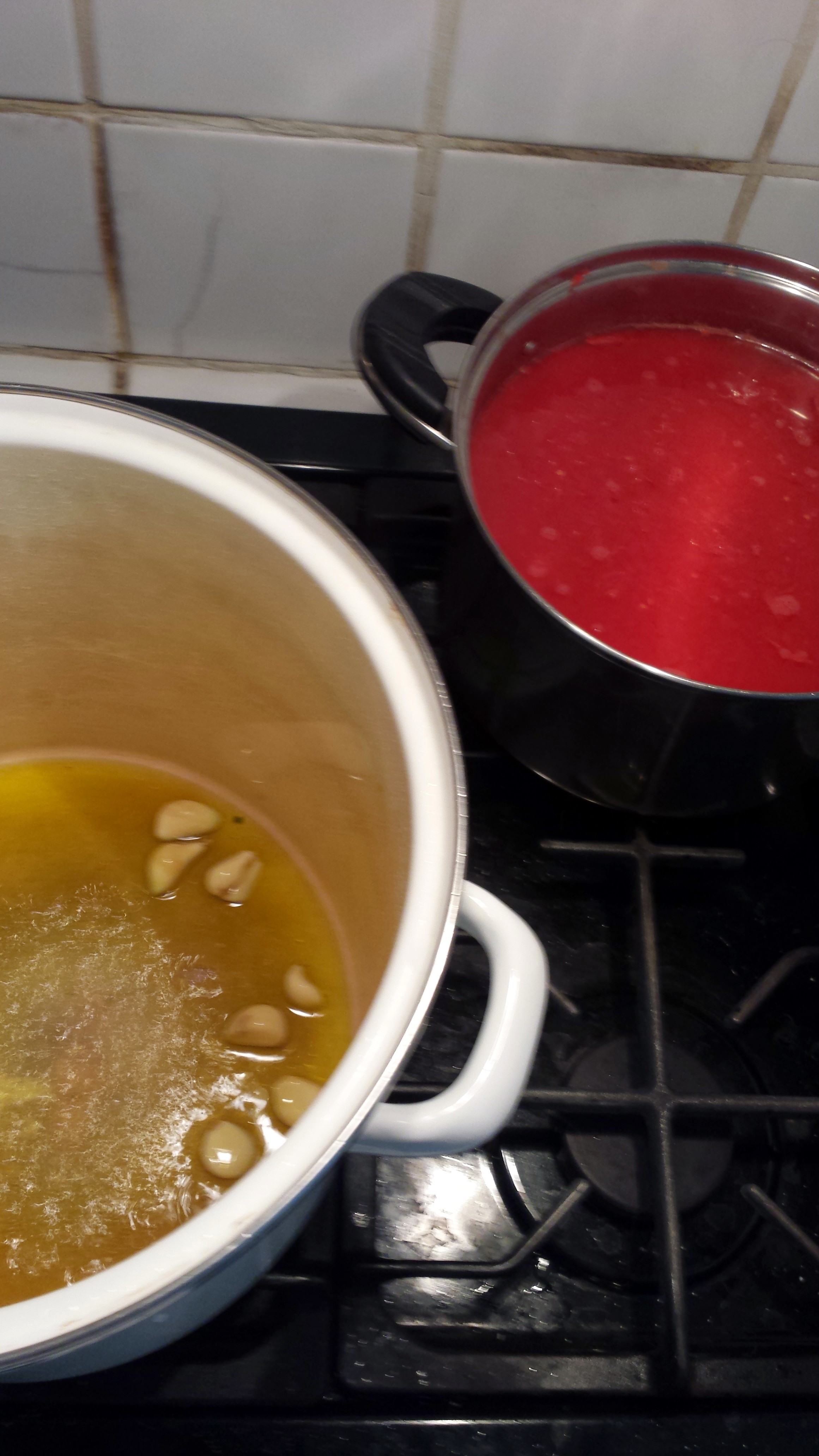 Pass the tomatoes through a food mill to get rid of most of the skins.  Fry the garlic, add the tomatoes and other ingredients .  Cook on low for an hour and a half.  I let it cool and freeze it in deli pint jars. 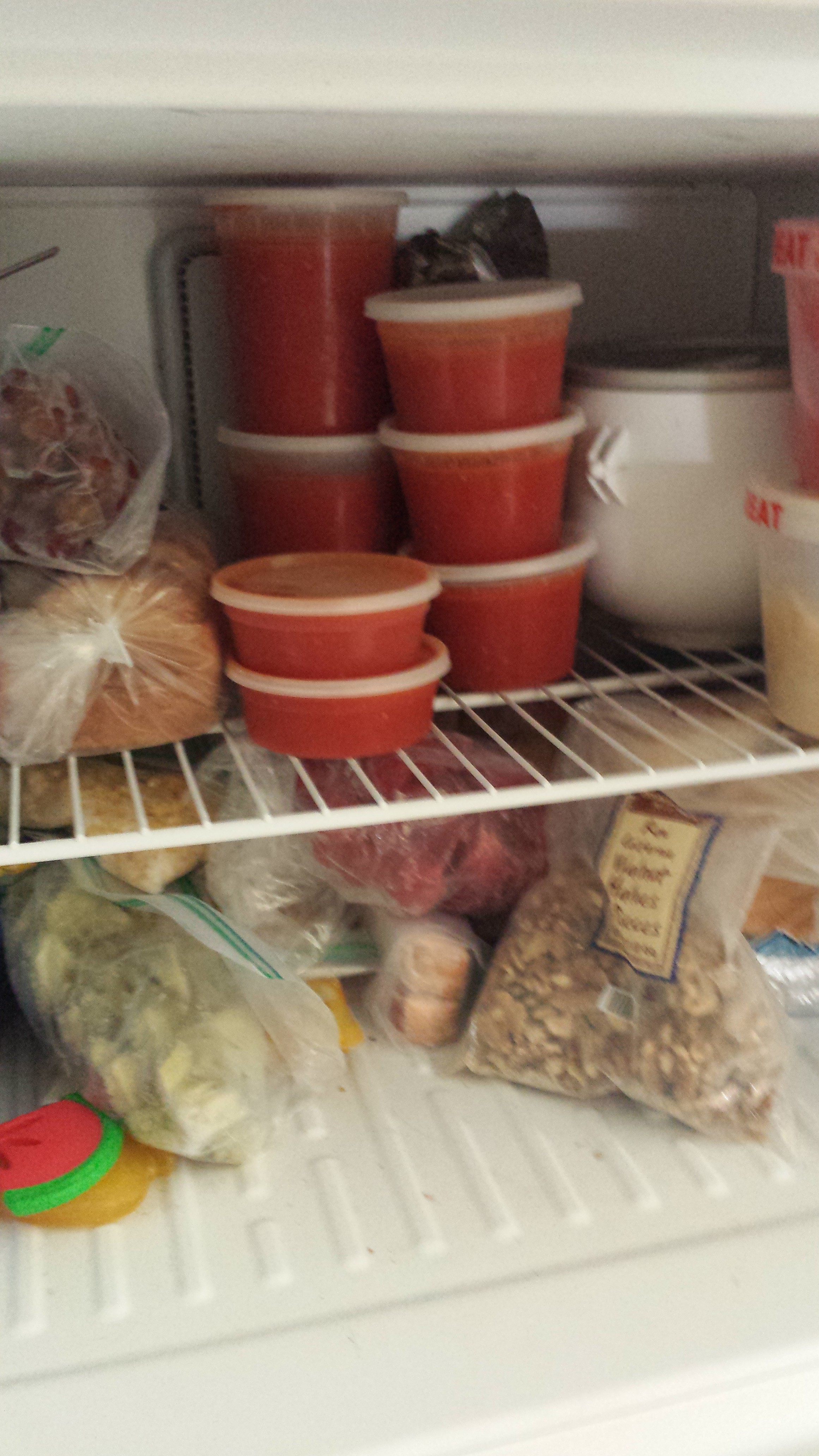 They are organic early girls.  They were a dollar a pound at the market, I asked the guy if he’d take five bucks for ten pounds of ones that were soft or split, but no mold, and he agreed.  I made this the day after.