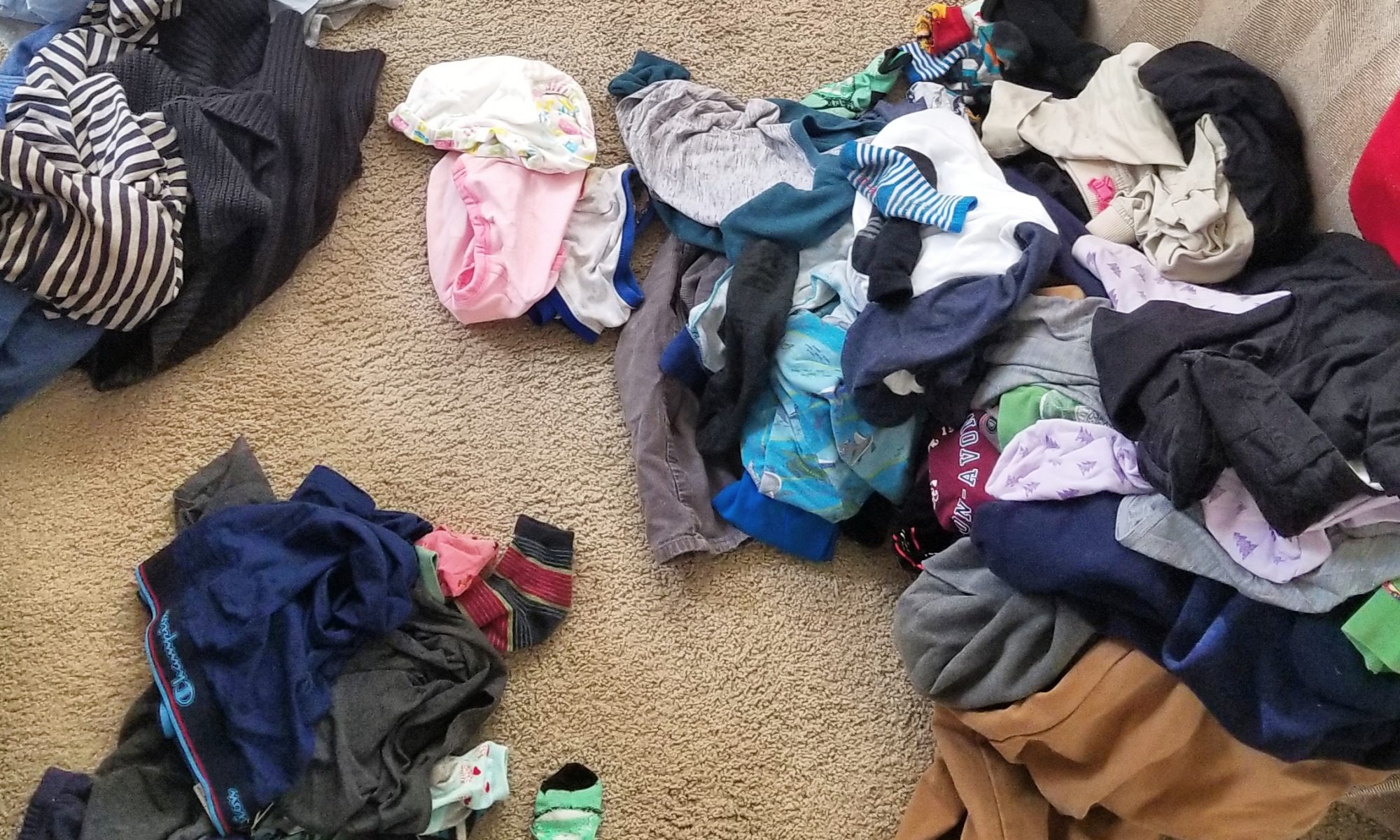 New to my Soundcloud feed, a flowing glitchy trip-hop number. I’ve been working on the feel of the music and focusing less on the structure of the compositions. Not sure if that’s a good thing or not, but there it is.

Sessions occur in the late morning or noontime, often when I’m trying to use music to relieve stress and increase positive feelings. They get quite strange and out sometimes, and it can be difficult to tell whether I’ve achieved my goal. I think JJJJ here is alright.

Quartet sax, bass, drums, organ. Marching to the end of the moon, honk! 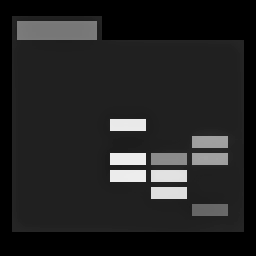 Three For Boom Hemroid The Leader

It’s such an amazing journey to watch the kids as they work through understanding and the English Language.  John John just started Kindergarten and is being exposed to the wide wide world outside of his relatively sheltered pre-school existence.  He knew about things in pre-school, like Star Wars, and Power Rangers Ninja Steel, and Ninjago, but “knew” in a way that’s like he’s the fourth person in a game of kid-culture telephone.  But now, he’s at Kindergarten.  He is around kids his age through 8th grade.  They “know” things and he’s impressed.  He’s learning and trying his best to hold his own.

We have a small fake game boy in the house.  It’s not the height of modern technology, but it has a color screen and a ton of games, at least by what the box says.  I won it at Christmas though still haven’t opened it or powered it up.  But John John loves to look at the box.  The box says it’s for ages 8+.  He knows he’s too young to open it to play (plus, it’s mine – right?) but is holding out till he is old enough.

So, he comes home from school the other day asking me, when he turns eight, can he also play Fork Knife.  His question was in such earnest, I had to turn away to crack my smile at the cuteness.

But this episode reminded me of a few things that I have been meaning to write about and need to do it before too much more time passes.

Story 1:
It was a weekend morning, and we were at the breakfast table.  The kids were getting rowdy due to hunger and I was making toast.

“The toast will be done in a minute,” I said, as I took the pieces out of the toaster and began buttering them.

“What do you mean? It has butter and jam.  It’s going to be good!” I said in exasperated tones.

I have so many questions.

Story 2:
John’s sunglasses case is on the kitchen table waiting to be put back in the car.  John John saddles up to the table and starts messing with the case.  “Papa, your glasses are on the table,” he informs us.

John John picks up the case and starts messing with it again.  Not being super rough, but what is the purpose of touching something like that – it’s only going to potentially damage the contents.

“Be gentle with them,” says John, quickly followed by, “John John, yuk! Stop kissing my glasses!”

Koko’s on her own trip, with much influence from her big brother.  Right now she’s on a Mother Goose kick, her favorite rhyme being “Humpty Humpty.”

I can’t wait to see what comes next.

The month of Mayhem is the time when DJs make special programming. I didn’t know what I would do until just a week ago today I recorded the interviews that will Air on the special. Interviewing is not easy, but I learned some things and I’m sure the audience can do the same. I hope I can edit it into a good interview.

KFJC MAYHEM 24 NOON-2PM
RECORDING THE VOICELESS
PRODUCER IAN BRENNAN
IN CONVERSATION WITH
HEMROID THE LEADER
“WHITE AFRICAN POWER”
“THEY WILL KILL YOU, IF YOU CRY”
“I HAVE NO EVERYTHING HERE”
___

PRODUCER IAN BRENNAN TRAVELS THE GLOBE
RECORDING ALBINOS, PRISONERS, SURVIVORS OF GENOCIDE, POVERTY,
AND WAR
JOIN US AS WE DIVE DEEPER INTO THE BACK CATALOG
THURSDAY MAYHEM 24TH FROM NOON-2PM ON KFJC

John John was recently sick – high fever, general malaïse.  You know.  Sick.  Of course, as soon as he was getting better, Koko came down with the same symptoms.  Unfortunately, I’d run out of those ear thermometer shields by then, so had to go pick some up from the pharmacy and took John John with me.

We walked in to the Walgreens and went straight to the cold and flu aisle in search of those shields.  They were, happily, easy to find and our shopping excursion was blissfully brief.  “Let’s go,” I said to John John, who was rubbernecking all around the medicinal displays.

One in particular had drawn his attention.  It was a little card jutting out from a cold product, calling you to come and buy it for congestion relief.  The poor cartoon woman on the ad looked miserable.  Red nose, watery eyes rolling back in her head, a tissue in hand, and corks up her nostrils.  I’ve felt just that way before.

“Why did she have corks in her nose, Mama?” the ever-inquisitive one asked.

We were walking toward the check out already, and there was a line at the counter.  A perfect chance to kill some time while simultaneously growing some empathetic reasoning and logic in the boy, my parental-self thought.

“Well,” I asked, “How would you feel if you had corks in your nose?”

He considered this with some seriousness and thought.

Then, “Mama, why are you laughing?  What’s funny?”

Nothing, my dear.  Absolutely nothing. 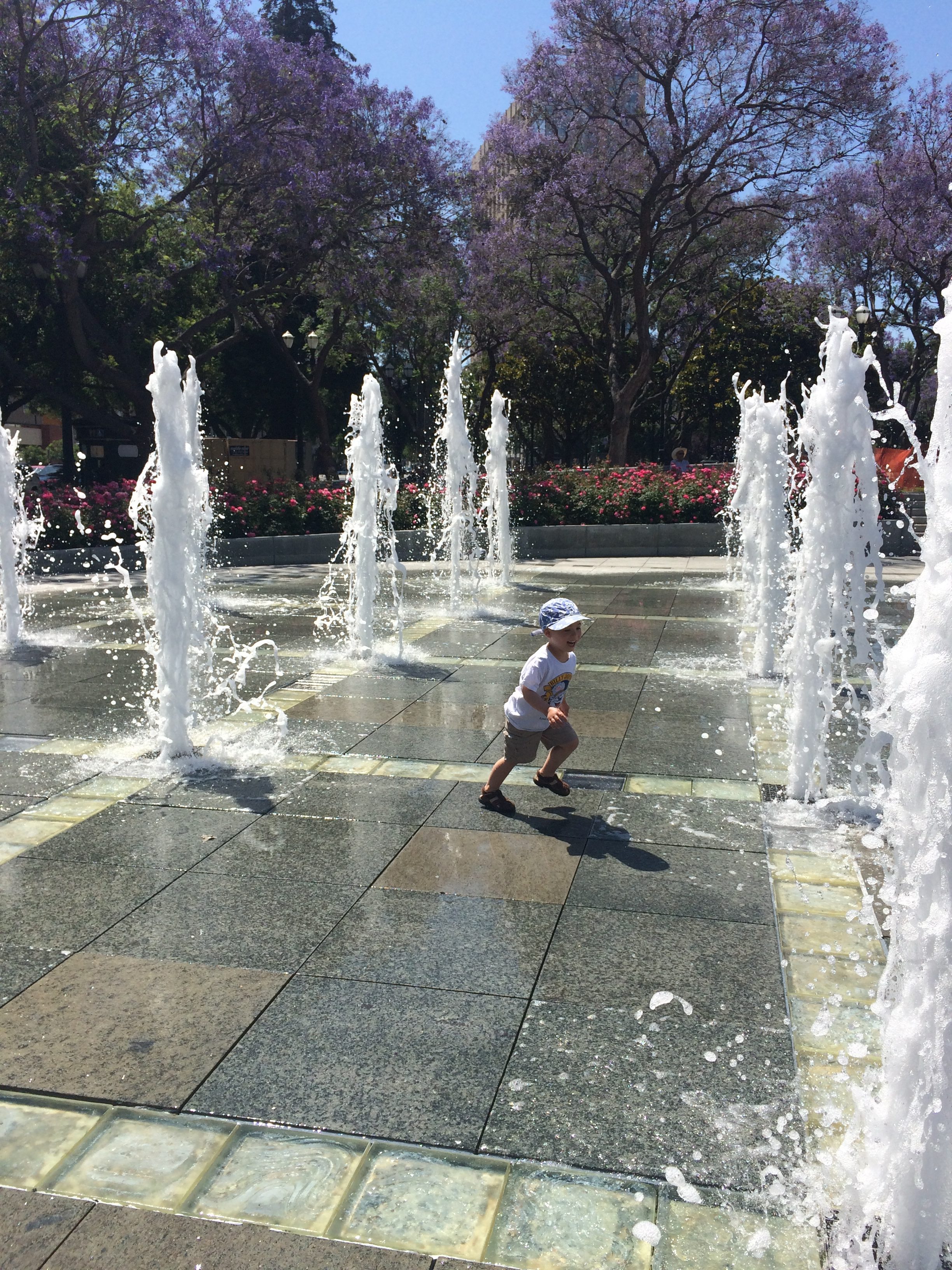 My thinking is the inking,
My belief is the leaf

Study of the Artist as a Patient

What’s The Matter With Me? is a podcast I’ve been working on since April. It examines my life as a person with Multiple Sclerosis. I release a new episode about once a week and they’re posted on Whatsthematterwithme.org as well as Apple Podcasts and SoundCloud. Currently, I’m up to episode 27.

I’m an artist, and I’ve taken that approach to What’s The Matter With Me? My artist statement reads, “I believe in using the transformative power of creativity to achieve social justice.” I think of it as self-portraiture.

In Our Own Voices

Disabled people are too often invisible, and spoken about in the voices of others. We are cared for, and sometimes pitied, and too often we don’t have the chance to speak up in our own voices and to determine our own destinies.

The What’s The Matter With Me? Podcast connects me to my family, friends, caregivers, the disabled community, and the community-at-large. I hope that thinking about my life as a disabled person and the experiences of others fosters empathy and develops my Disability Consciousness.

John John is still very much in the inquisitive “why” stage, and it seems like the questions often come at inopportune times for me, like when I’m trying to merge on a crowded freeway, or we are trying to finish getting dinner on the table.  But instead of setting a boundary to get some space, I often just give in to answering these questions – it’s like some part of me truly believes that if I answer, then the subject will be closed and the questions will stop.  Of course, they never do.

It drives John nuts, all the back and forth that happens with John John and me.  He can’t understand why I let myself get sucked in.  Frankly, neither do I.  Which brings me to this story. 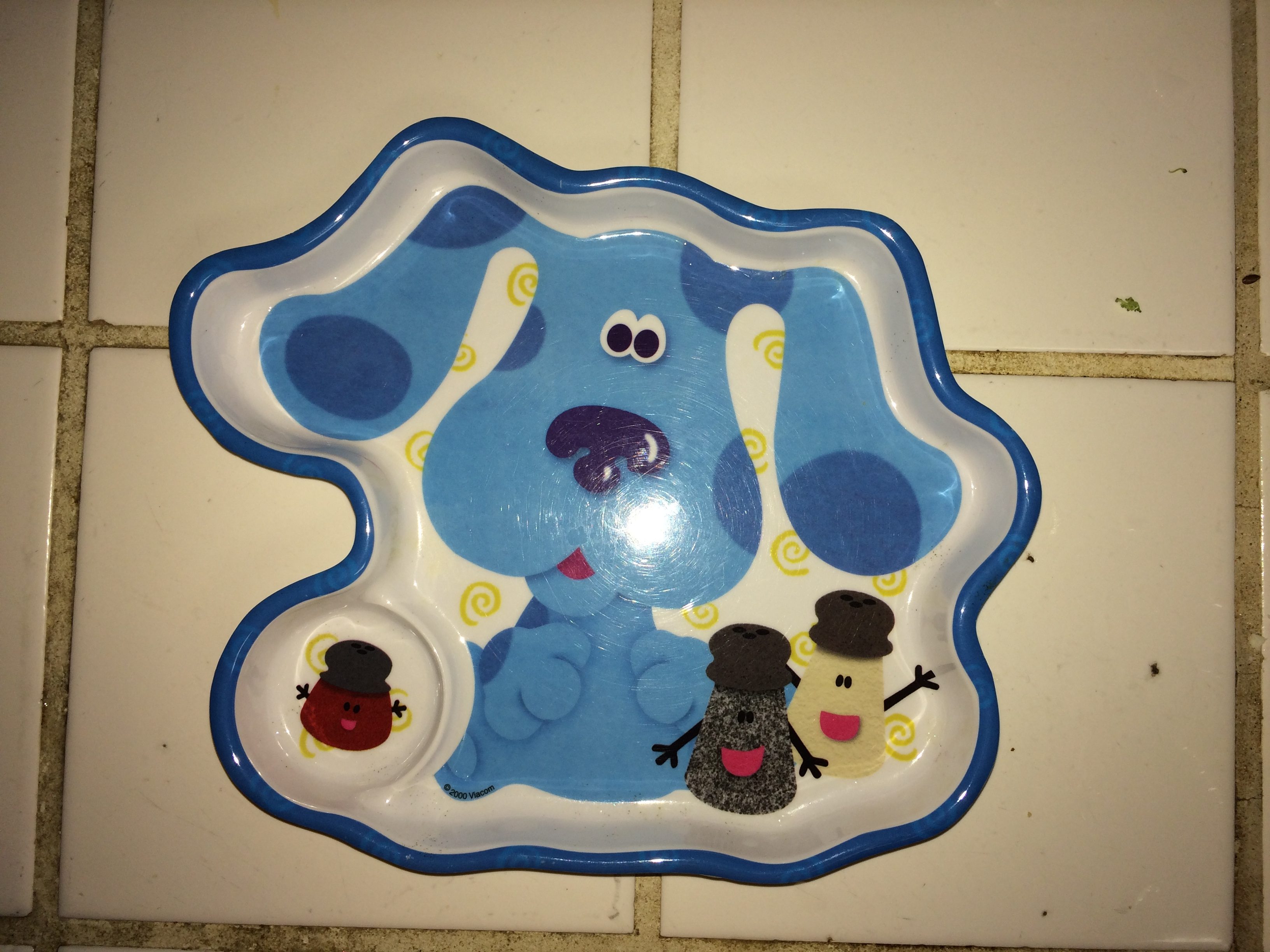 Yesterday, John John uncovered this plate I’d gotten from a thrift store when he was littler and never found useful as an actual plate, and so relegated it to the toy area.  I also did not understand the plate, and something about that disturbed me and made me uncomfortable using it. For example, if the little one is the baby, then the Salt and Pepper shakers are the parents.  What was the baby condiment supposed to be? And, why was the partition at the left so small?  “The baby condiment is red, and the partitioned area is small.  Maybe it is supposed to be for ketchup and the baby is ketchup,” you might logically think.  Except that there are holes in the baby’s lid.  You may not be able to see it in this picture, but there they are.  Also, why would salt and pepper’s child be ketchup?  The lack of logic of this plate bothered me, and these thoughts would run through my head every time I saw the plate, and I was relieved to relegate it to the toy drawer.

But here it was, out, and John John asking to use it on the alternate days from when he wanted to use the other plate I got at the same time, from the same thrift store, that also bothers me (it appears to be a cute plate with the alphabet running around the edge, but upon closer inspection it had only ABCABCABCABCABC printed around the border, teaching nobody anything, and just looking like it says CAB CAB CAB at each and every glance…TOY DRAWER).

So, John John brought the dog plate out.  I was preparing dinner.  He began coming at me from all angles.  I’m deflecting, trying to get food done.  John is sitting at the counter, deftly ignoring us both and playing chess with someone online.

“What are those black and white containers, Mama?”

“Because they are in shakers that we use for salt and pepper.  Also, salt is white.  Pepper is black.”

“What’s in that little one?”

“Because it’s red, and chili pepper flakes are red.”

I’m trying to think of how to describe the chili pepper that we’ve seen in shakers at pizza parlors, despite the fact that those shakers are always larger than the salt or pepper shaker; my mind’s a torrent as I also try to finish the salad dressing.  At this very moment, John (who I thought was ignoring our ricochet conversation altogether), piped up:

“It’s someone who says they’ll do something, but doesn’t.”

I just about plotzed.

John John loves his sister, but sometimes he needs to exclude her just to have something for himself.  Some space in an idea that he doesn’t have to share everything.

It cracks me up that he gets some satisfaction withholding pretend food from a girl who is not even around or interested when this type of activity is usually happening.

She is around, though, on occasion.  And then, he will have to make up a food that she can’t even pretend to eat.

The other day he was playing ice-cream shop.

“Mama, do you want ice cream?”

“It has caff, caff…” he struggled to find the word for that thing we don’t let him drink.  We drink a lot of coffee and tea, and he knows it’s not for kids.

“Caff…caff… It has alcohol,” he finally came up with.

Yes, that is the other interdit for children in our house.